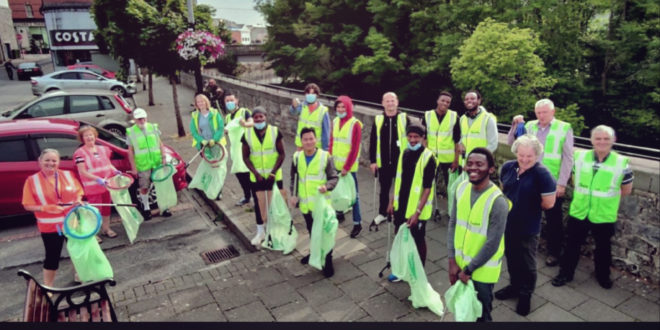 RESIDENTS of Direct Provision in Ennis have joined efforts to keep the county capital looking its best by becoming the newest members of Ennis Tidy Towns. According to new member Innocent Iroaganachi, “Participating in taking care of the community, like we did in Miltown Malbay, is our little way of saying thanks to the community that has contributed so much to our well-being.”
Ten men who are international protection applicants and are residing in Ennis Clare Lodge, which began operating as a direct provision (DP) centre late last year, have been inducted as members of the local organisation. The induction which took place at the Abbey Street Car Park, saw in attendance some long standing members of Ennis Tidy Towns. Among the newly joined members were: Aung from Bangladesh, Amin from Algeria, Godsway from Ghana, Membratu from Eritrea, Nicholas and Jonas from Zimbabwe, Andrea, Onise and Koba from Georgia and Innocent from Nigeria.
In preparation for their first clean-up operation the men were given some personal protective equipment, like high-visibility safety vests, with their names and logo of the organisation inscribed on them. Other equipment included brand new handheld rubbish picker, and customised disposable trash bags with clips.
In a brief address Cormac McCarthy, chairman of Ennis Tidy Towns expressed appreciation to the men for their involvement. They were informed about the basics involved in carrying out their responsibilities as members of the organisation, as well as some activities Tidy Towns are involved in, such as litter picking, planting flowers and trees and sponsoring of some green initiatives. This was followed by a brief self-introduction of the men, to the other long standing members of the organisation who were present. On behalf of Ennis Tidy Towns Cormac encouraged them not to hesitate in bringing forward any environmentally friendly project they wish to undertake that will be beneficial to the community. As their first task, the newly inducted men, in pairs, went picking littered rubbish on the major streets and roads of Ennis town.