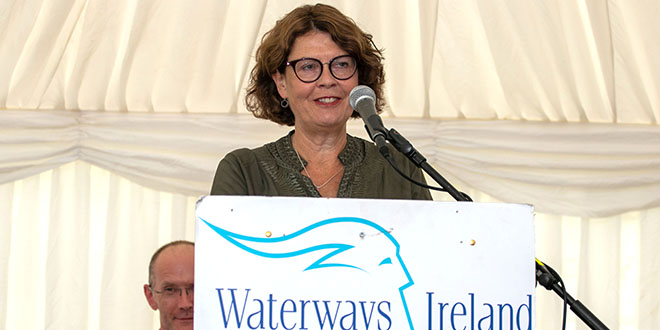 “It is just so horribly symbolic, that of all the people who happened to be watching that silly staged riot that night, that [Lyra McKee] was the person who was killed, because she was the person who was a spokesperson for ordinary young people trying to make a life in the North” Susan McKay, at the Scariff Harbour Festival.

DERRY Girl Susan McKay gave an insightful talk at Scariff Library where she detailed her harrowing job as a Troubles journalist. The key message was the need to come together in a spirit of reconciliation and mutual understanding.

As the Scariff Harbour Festival celebrates cross-border relations and provides a platform for this dialogue to take place, Susan commended its organisers for its efforts.

“I think that this festival is really fantastic because it does attempt to bring a Northern element to the far South West. Lots of people live their lives in the Republic without ever thinking about the North. I think that is a serious mistake, because if there is ever going to be peace in Ireland, no matter what happens about the border, people in the Republic are going to have to reach out much more to people in the North,” she said.

Susan was born in Derry in 1957 and came of age with The Troubles.

“I was just about to embark upon my teenage years when the whole thing blew up. I was 12 this time 50 years ago when the Battle of the Bogside occurred, which is being commemorated in Derry this week with events and anxiety. After what happened to Lyra, there has been a very bad atmosphere in Derry and a sense that the people who killed Lyra seem to be able to oblivious to the horror with which her murder was greeted by everybody else. They seem to think that they should continue with what they call their freedom struggle, which is just so far from anybody else’s idea of what is a freedom struggle,” she said.

Beginning her talk, Susan read from Female Lines, a collection of essays by Northern Irish women writers. Quoting another Derry girl, Julieann Campbell, she was able to convey what we in the South don’t really understand about the North.

Julieann writes, “While perhaps understandable in the context of these islands, it is unfortunate that we tolerate such daily normalized fear”.

Susan said this constant fear is one of the things that Lyra wrote very effectively about.

“It’s like a kind of a trigger waiting to be flipped with people. You’ve got all the habits of vigilance but there isn’t any kind of automatic reason to be frightened in the way that there used to be when there were actually bombs and shoot outs and so on. There is just this preparedness for catastrophe, which afflicts Northerners,” she described.

It is easy to understand why as she recounted one of her harrowing interviews while she was Northern editor at The Sunday Tribune.

“My daughters were small during the Drumcree summers of the 1990s. Sometimes they would cling to my legs at the front door as I went out to work. I would prize their little hands off, tell them I’d be back soon, kiss them goodbye. I’d feel torn. Part of me wanted to stay at home, snuggle up on the sofa and read them stories. But the journalist part of me needed to tell other stories – Portadown stories”.

She detailed how her job took her to the door of Justin and Philomena Morgan and how they invited her into their house as if she was a friend. “Their lovely child, 16 year old James, had been brutally murdered. He’d gone out, a carefree teenager on a summer day, never to return. He had been abducted, beaten with a hammer, set on fire and his body had been dumped into a pit used to dump the carcasses of dead farm animals. An Orange man from the nearby town of Newcastle had walked into a police station the next day and confessed”.

She detailed how the Morgan’s had showed her a photo of James, who she described as a smiling, mischievous dark haired boy with his whole life in front of him.

“Then, Justin said something devastating. ‘I only hope the first hammer blow killed him,’ he said. I will never forget the look on his face as he did so. I would go home at the end of these working days to my daughters and hug them tightly and cry as if I was returning some from some foreign country after a long, long time”.

She commented that as a Troubles journalist she was “uniquely privileged to do this work”. “But I also believe that left us with a residue of sadness that has never entirely dispelled”.

Susan discussed how all Northerners have been affected by The Troubles, even though there is a belief there that if you didn’t get killed, or if nobody really close to you got killed, that you escaped. The reality for Northerners is the effect has permeated through the generations. She explored this concept by discussing Lyra’s writing.

“Sometimes people can be incredibly disturbed just by having known someone that was killed. People have survivor’s guilt about the North. Even people who survived atrocities, who have experienced terrible injuries in a bomb, and they don’t want to talk to you because they feel that they are claiming victimhood. Their sense is that the people who were killed were the victims and that they weren’t. But lots of people would look at them and think well, actually, you are. You’ve got a drink problem, you’re obviously not enjoying your life, you’re on constant antidepressants or you are full of anxiety or you’re obviously in some way or another overshadowed. And that was very much what Lyra McKee wrote about,” she said.

Lyra was only 29 when she was murdered, and Susan explained that it was Lyra’s generation that supposedly weren’t impacted by The Troubles.

“Lyra called them the Ceasefire Babies, because they were born in the 1990s. She said that ‘We were supposed to be the spoils of peace, it’s just that they never seemed to reach us’. One of the things that is so tragic about her loss is the fact that she was going to give voice to that – the way in which her generation, the young people of today and Northern Ireland, are themselves in some ways hampered by the shadow of the past. So it is just so horribly symbolic, that of all the people who happened to be watching that silly staged riot that night, that she was the person who was killed, because she was the person who was a spokesperson really for ordinary young people trying to make a life in the North,” Susan said.

“We sort of say, ‘Oh, you have no idea what it used to be like. You think you have it bad, it used to be you couldn’t walk down the street without being shot at. But how is that their business? They are young people trying to make a living in a world in which they’re threatened by climate catastrophe, poverty, Brexit, the sheer difficulty of making a living in a ruined climate and society and we are turning around and saying, ‘well you don’t know how lucky you are’. They’re not lucky at all. They’re looking at their parents who are messed up because of The Troubles. They’re looking at their grandparents who maybe were killed. It’s not lucky at all,” she said.

Susan highlighted the importance of sharing these struggles and coming together in a spirit of understanding.

Discussing Derry Girls, which has become a television phenomenon internationally, she said “I think Derry Girls is absolutely brilliant. It has done more for educating people around the world about Northern Ireland than anything else”.

“It is quite remarkable how much people of my generation also relate to it. When I look at my diaries from my school days, sex plays a much bigger part in my preoccupations than The Troubles,” she said.

She commented that her diaries alluded in little asides to The Troubles going on but only in how they related to her social life, and this is something that she feels the producers of Derry Girls have got bang on.

“That’s what it is like in Derry Girls and the girls are just absolutely full of their hormones and their music and their desire for teenage kicks, and the Troubles is there marginal and all impacting but it’s not the centre of their lives”.

Carol Byrne is a reporter at The Clare Champion newspaper reporting on news in the East Clare area and the arts. She also covers the courts in County Clare and has received seven national awards for this coverage from the Law Society of Ireland and a National Lottery Local Ireland national media award for Best Community Story 2019. A Masters in Journalism graduate of NUI Galway, she also holds a Bachelor of Arts from the University of Limerick in Music and Media Studies, and a Higher Diploma in Irish Legal Studies. She began her career interning at The Limerick Leader and Clare FM, before taking up a full time post at The Clare Champion in 2006.
@@Carlsburn
Previous Ready For Throw-In For 2019 Clare SFC & 2019 Clare IFC
Next Clare beef protest continues despite promise of talks