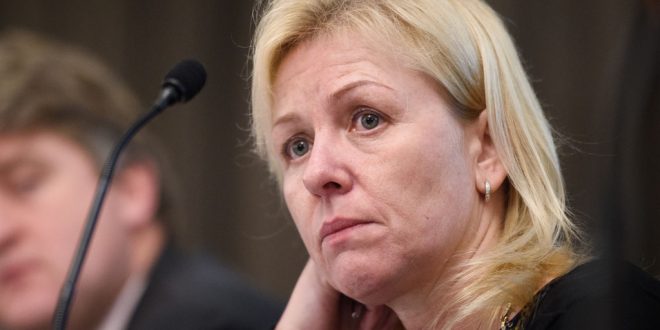 Councillor Ann Norton believes full time carers and people with disabilities should be prioritised as part of the national vaccination programme. Photograph by John Kelly.

A COUNCILLOR, who is still suffering from a severe bout of Covid-19, has proposed that their next council meeting should only last two hours in view of public health guidance.

Clare County Council will hold its June meeting in Glór to comply with social distance guidelines instead of its normal venue at council headquarters.

“We need to be cautious and ensure whatever can be done is done. I wouldn’t like to see anyone getting the virus.

“I didn’t know I had Covid-19 so how can one of my colleagues know they had virus unless they were tested and told and then they will be in quarantine.

“People don’t realise they have the virus. A number of people who had the virus weren’t tested because it was so mild but they could still pass it on in a room full of other people,” she said.

The Ennis Councillor confirmed she hasn’t fully recovered from the virus, is still sleeping a lot, is physically exhausted and is still experiencing chest pain.

Having telephoned a family doctor last week, Councillor Norton was told that she had suffered from a very severe infection, which could take months to fully leave her system.

“I can’t shake it off but I know I am not contagious. I have been told by my doctor I need to be patient and it will take time. It just walloped my body,” she said.

Meanwhile, the Clare Champion has learned that only 12 of the 28 councillors attended the April meeting of the council.

Clare County Council chairperson, Clare Colleran-Molloy said the possibility of holding the April meeting in a bigger venue such as Glór wasn’t discussed prior to this meeting at the time as the local authority had closed this facility.

Councillor Colleran-Molloy recalled arrangements for the May meeting were discussed at a corporate policy group meeting where Glór was put forward as a viable option for this meeting, which was subsequently deferred.

It was agreed at a recent corporate policy group meeting that items on the council’s agenda for the May meeting would be deferred to the June meeting.

Councillor Colleran-Molloy said holding a local authority meeting in Glór involved a lot of work for the meetings’ administrator to examine how this could be achieved accommodating the media and councillors while still taking into account social distancing.

Asked about the small number of councillors at the April meeting, Councillor Colleran-Molloy explained the council agenda was sent out and that any councillor who wished to attend could attend.

“There was full consensus around how we were going to approach the April meeting. Nobody was asked not to attend if they wanted to attend even those over the age of 70 who were cocooning under public health guidance.

The first citizen confirmed she made a number of telephone calls to Fianna Fáil councillors and other councillors spoke to colleagues in their own political groupings prior to the April meeting advising them they didn’t have to attend if they didn’t wish to in view of the need for social distancing.

Councillor Colleran-Molloy recalled she telephoned councillors in the Ennis area who didn’t have far to travel to ensure they would have a quorum and they indicated they would be in attendance.

“The legality of decisions made at the meeting were on sound footing based on advice received from the department,” she said.