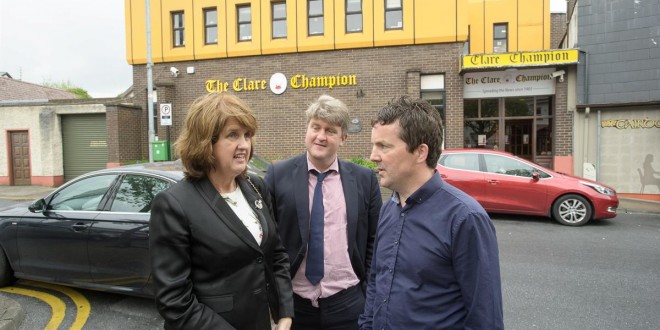 DURING her visit to Clare recently, Tбnaiste and Minister for Social Protection Joan Burton told The Clare Champion that issues relating to the provision of social housing in Clare could be eased if Clare County Council follows the example of their Limerick counterparts and rolls out the Housing Assistance Programme (HAP).
During her visit to the offices of The Clare Champion, Barrack Street was closed off to vehicular access, while there was a significant garda presence patrolling the street.
Minister Burton was speaking in the context of homeless issues in Kilkee and Lahinch, which were highlighted by The Clare Champion in recent weeks.
“We’re approaching this on a case-by-case basis. This is a discussion we want to have with Clare County Council. Along with Jim Lynch, the overall manager of the Department of Social Protection Services in the Mid-West, we would like to see Clare County Council becoming part of HAP,” the Tбnaiste said.
“It has been piloted by Limerick County Council. We think it would potentially help all families because it would mean that if they did get a HAP, which is a private rental in a lot of cases, they would also be free to be involved in work because essentially they would be on a differential rent.
“I am conscious of the fact that with the changes going on in Limerick, there is a fair amount of movement. It’s a bit like Dublin. I represent Dublin West, on the border with Meath and Kildare. A lot of people if they can’t get what they want in Dublin, they’ll go up the road to Dunboyne or down the road to Leixlip. I think that Clare and Limerick have a similar relationship,” she said.
Minister Burton said this type of system could aid Anna Heaney and Chris Burke in Kilkee, who went public last week on their struggle to find a permanent home in the West Clare town.
“If it was possible to progress HAP with the county council, which our officials in Social Protection are anxious to do, that would mean that family, not alone could we help them with their housing but we could also help them with getting back to work or education,” the Labour Party leader stated.
She acknowledged that social housing is in short supply in Clare and throughout the country but the Tбnaiste laid the blame at the feet of the Fianna Fбil government, who were in power up until 2011.
“The issue is one of supply. The previous government basically stopped doing social housing in the early 2000s as the economy began to take off. They seemed to think that the private sector would provide through rent supplement. Landlords might be happy to let in the winter time but the same landlord, if they are in a tourist area, may want to get the value of the tourist lettings in the summer.
“I want families with children to have a home, a school and a local community that they can relate to,” Minister Burton added, before noting the role that public representatives can play.
“I have made it clear in all my answers in the Dбil that where a family is at any risk of losing rented accommodation and is therefore in danger of becoming homeless, I really want to ask that family to make the public representatives aware, that the first thing they should do is make contact with the local Community Welfare Service. The community welfare officers have powers to make a decision where they can go outside the rent cap.
“I made a decision to do it in that way, conscious of the fact that there are a lot of people in private rented accommodation paying their own rent and we didn’t want to put huge pressure on their rents. But we’re in a position where the community welfare officers have the authority to negotiate on an individual basis,” the Tбnaiste stressed.
She also pointed out that money has been set aside for a social housing fund in Clare.
“Minister Alan Kelly has announced a programme of Ђ26 million for Clare, which would be, I think, the largest allocation in relation to housing in Clare, for a very, very long time. I don’t think there has been a similar allocation,” she maintained.
Peter O’Connell