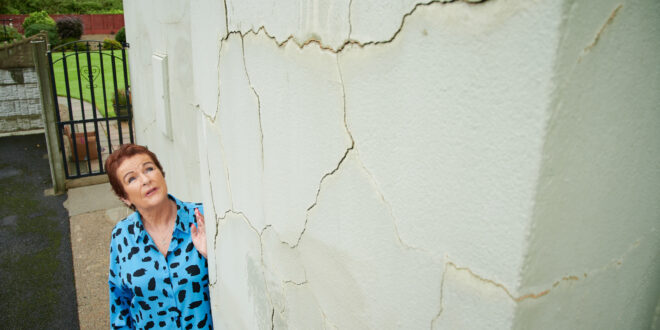 Geraldine Kennedy from Parteen, a member of the Clare Pyrite/Mica Action Group.

THE founder of a group of up to 40 home owners, whose properties are crumbling because of defective building materials, has appealed to the government not to delay the extension of a support scheme to County Clare.

The council has confirmed that it has sought the extension of the scheme and been contacted by the Department of Housing. The authority has made contact too, in recent days, with The Clare Pyrite/Mica Action Group.

“Our situation has been raised by the council, TDs and senators, we’re so grateful for that support,” Dr Martina Cleary said. “It’s very important now that the process isn’t made overly complex. Several of our members are living in homes that are ready to fall and they’re afraid for their lives. Each winter that goes by, with the damp and the frost, the situation is getting worse and you can literally hear the blocks cracking. You can imagine the psychological stress. In Mayo and Donegal, where people had to wait ten to 12 years for help, some people passed away before the scheme was set up.”

Asking in the Dáil that the Defective Concrete Blocks Scheme be extended to Clare, Deputy Michael McNamara also noted the profile of affected home owners. “The majority of the home owners in this instance are retirees and have family homes,” he said. “They have worked all their lives and paid the mortgages on them. Like most people having paid their mortgage, they are retiring on a pension and they just do not have the money for the substantial works required.”

The independent TD told the chamber, too, that it is “wrong and improper to differentiate between people with the same problem in Mayo and Donegal or in Clare”. He added that one concrete block manufacturer, who he chose not to name, linked many of the homes believed to be affected, and that the problem was likely to extend to other part of the Midwest.

Responding to Deputy McNamara, Minister of State Malcolm Noonan sympathised with those caught in what he described as a “distressing” and “very worrying situation”.

“The Department would need to see the substantive information… that supports Clare County Council’s request for an extension of the scheme to County Clare,” he said. “There is an opportunity for Clare County Council to take the lead and, first, demonstrate that the issues in Clare are, in fact, due to the presence of excessive levels of deleterious materials, whether mica or pyrite, in the aggregate used to manufacture the concrete blocks. Second, the council should quantify the extent of the problem in the area.”

Reacting to the minister’s commitment to continue working with the county council, Dr Cleary said the group is in a good position to provide the data required. A number of members have IS465 standard reports, which comply with national guidelines. “We shouldn’t have to reinvent the wheel,” she said.

In a statement, Clare County Council confirmed it has been contacted by the department. “The response confirms that while there are no immediate plans to extend the scheme to other local authority areas there is an opportunity for Clare County Council to take the lead in establishing the evidential basis for such an extension to Clare,” it said. “This exercise will require the submission of more substantive information which will demonstrate that the purported issues are in fact due to excessive amounts of deleterious material in the aggregate used to manufacture concrete blocks as set out in the IS465 protocol and will also require quantification of the extent of the problem in the county.”

The authority said it “will be engaging further over the coming weeks to begin this process of validation”.

Fiona McGarry joined The Clare Champion as a reporter after a four-year stint as producer of Morning Focus on Clare FM. Prior to that she worked for various radio, print and online titles, including Newstalk, Maximum Media and The Tuam Herald. Fiona’s media career began in her native Mayo when she joined Midwest Radio. She is the maker of a number of radio documentaries, funded by the Broadcasting Authority of Ireland (BAI). She has also availed of the Simon Cumbers Media Fund to report on development issues supported by Irish Aid in Haiti. She won a Justice Media Award for a short radio series on the work of Bedford Row Project, which supports prisoners and families in the Mid-West. Fiona also teaches on the Journalism programmes at NUI Galway. If you have a story and would like to get in touch with Fiona you can email her at fmcgarry@clarechampion.ie or telephone 065 6864146.
Previous Over 7,500 Clare people on PUP
Next Shannon Airport almost empty of people