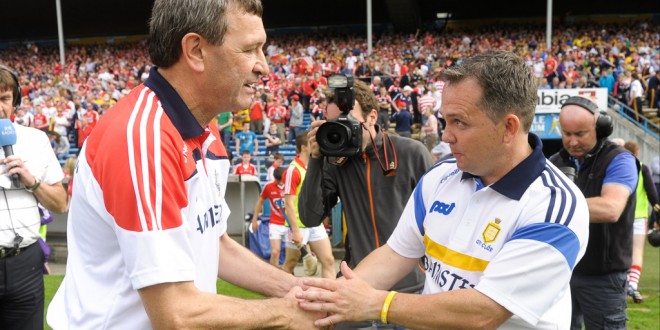 A sharper and stronger Cork deservingly overcame Clare in an enthralling Munster senior hurling championship semi-final played before an attendance of 28,660 at sun splashed Semple stadium Thurles this afternoon.

A powerful performance from midfielder Aidan Walsh—he wasn’t part of last year’s panel— played a key part in the Leesiders victory on a day when they dominated the midfield exchanges while their half backs and half forwards also held the upperhand.

A number of Clare players failed to reproduce the form which helped the Banner side to the All-Ireland title last September but there can be no complaints as the better team won this contest.

[doptg id=”26″]Level five times in the opening twenty five minutes, Cork then edged into a two point lead and they struck a major blow three minutes from the half time whistle when Patrick Horgan blasted a 20m free to the net after Jack Browne was penalised for a push on Alan Cadogan.

Clare received a great boost on the stroke of half time when John Conlon goaled after efforts from Conor McGrath and Colin Ryan had both been stopped. This left the half time score at 1-13 to 1-10 at the half time whistle.

Points were exchanged three times in the opening eight minutes of the second half before Cork hit five in a row to open a seven point gap.

The introduction of Nicky O’Connell and Cathal McInerney resulted in Clare hitting three unanswered points but the vital score came eleven minutes from time when Pat Horgan drilled a Cork penalty to the net.

From here on there really wasn’t a doubt about the outcome and a goal from susbstitute Darach Honan, a minute from the end of normal time ensured that fans remained in their seats until the final whistle.

Cian Dillon, David McInerney, JohnConlon, Colin Ryan and Conor McGrath battled hard for Clare but the day belonged to Cork who now go on to play Limerick in the Munster final while Clare await the qualifier draw to find out who they will face next