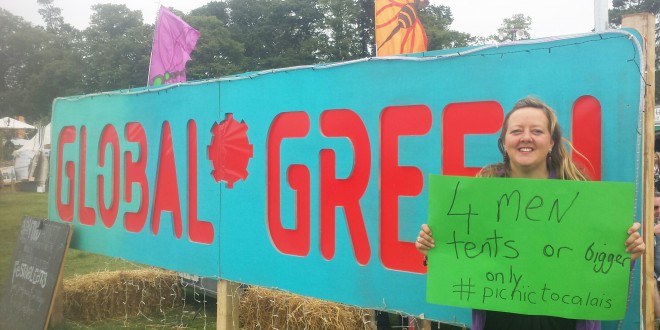 Róisín Ní Gháirbhíth at Electric Picnic at the weekend.

A logistics expert from an international development agency has joined the Clare to Calais campaign, after it grew from a single van to a nationwide humanitarian aid convoy. The group will bring supplies from Ireland to the French port on September 30, in response to the international refugee crisis.

Róisín Ní Gháirbhíth from Inagh and her friend Tracey Ryan, from Cork, began the movement less than two weeks ago. Now they have raised nearly €60,000 and are bringing two trucks, 20 vans, three campers and several cars of goods to the migrant camps in Calais and are considering adding a 56-seat bus of volunteers to distribute the donations.

“It is so big now we are meeting with a logistics manager later this week and we are very lucky in that a man who had been travelling has just come back and has volunteered to be a full-time administrator until we go on September 30,” Ms Ní Gháirbhíth told The Clare Champion.

Anything that is not needed in the Calais camps will be sent on to refugees in Hungary and camps in Syria. The group has already passed on a van of donations to Human Appeal International Ireland, a non-profit organisation that has been working in Syria for the past five years.

“The number one plan is to make sure they have everything they need in Calais and, after that, we will send money and supplies we have left over to Hungary and to Syria.

“One whole van load of stuff is definitely going to Syria, we have already passed that on. The response has been so positive that I know we will still have enough by the time we go,” Ms Ní Gháirbhíth said.

The Ireland Calais Refugee Solidarity Fund, set up by Ms Ryan, has raised more than €50,000 since this day last week. According to its Go Fund Me Page at the time of going to print, it had received more than 1,100 donations valued at nearly €59,000.

As well as individuals, donations were made as wedding gifts and by groups like Limerick Coder DoJo and national school pupils.

Clare people are showing “incredible generosity” towards refugees and migrants, according to Ms Ní Gháirbhíth.

“The people of Clare should be very proud of themselves. There are drop-off points in practically all the counties now for donations but in Clare we have about 15,” she stated.

The group collected tents, wellies and camping mats at the Electric Picnic music festival in Stradbally, County Laois at the weekend for the convoy to the French port.

“We got about 400 tents there and 100 pairs of wellies, as well as hundreds of mats. We did not accept bedding as we did not want to take anything that had been used all weekend at a festival. We had about 30 to 40 volunteers there on Monday and about 10 of those were from Clare,” she said.

“Clare people have been amazing. Some of my old school friends have stepped up. There are lots of people who are not usually activists who this has motivated into action. The only politician who has contacted us at all is Michael McNamara. He rang and said he would help in any way he could and even offered to let us use his office as a collection point but I declined because I didn’t want to make this party politicial.
“He contacted us back before anyone really knew about it and it was just before his wedding, so he had a lot on his mind. He also said he would bring a question to the Dáil about it when he comes back from his honeymoon,” she added.
“There are fundraisers taking place all over the county. I always believed that people will help if you give them the opportunity to do it but this has been phenomenal. It has grown exponentially. Clare County Council is doing a coffee morning, the Clare Women’s Network is doing one to raise funds.
“There is a Wild Food Supper on Monday evening from 5.30pm to 8pm in the Wild Kitchen in Lahinch. People can get more information on that from 087 6877890.
“I would just ask people to go along and support these as best you can and keep an eye on the Clare to Calais Facebook page details of drop-off points and fundraising events,” Ms Ní Gháirbhíth concluded.