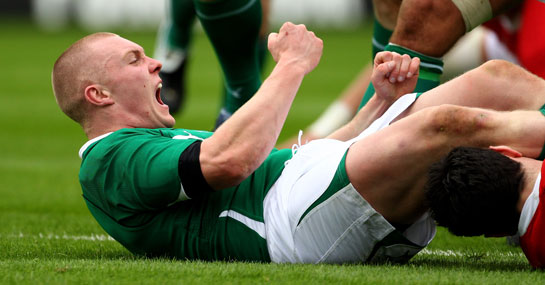 MUNSTER and Ireland rugby star Keith Earls was among the interested parties at  Shannon Airport terminal this week,  as more than 700 young people from around the country gathered to look at solutions for how people will live, work, play, learn, shop and travel in 2064.

With support and mentoring from Irish Technology Leadership Group (ITLG) investors, the Irish dragons Barry O’Sullivan, Peter Casey, Gavin Duffy and Sean O’Sullivan as well as Dell’s Entrepreneur in Residence Ingrid Vanderveldt, the students competed for an array of prizes with the overall honours going to Limerick school Castletroy College.

A number of Clare schools took part, including St Flannan’s. Luke Lawlor was one of the  students present from the Ennis school and he said his group were looking at new possibilities for accommodation. “We have an idea for automated housing, where you have a central AI in your house that does all your cooking and cleaning, if you’re away on holidays it’d look after your home. You could programme it to cook a chicken in the oven say, or sweep the floor. It’d wake you up in the morning and if you’re away you’d be connected to it on your phone.”

Grainne Larkin brought a group of students from St Anne’s Community College and they were looking at how travel in 2064 might work. “We’re talking about travel and the kids are coming up with different ideas about how travel could be in the future, how much more advanced it could be, how efficient and safe it could be. They’re now brainstorming the different benefits and challenges that could be inovlved in it,” she said.

Fourth years from St Patrick’s Comprehensive were also at work, looking at what play may be like in 50 years time. James Hanrahan said his suggestion hadn’t got much backing from his colleagues. “It was challenging just to get the first idea, we went from virtual reality SIMs to a worldwide gaming company. I think it was me that said a World Cup Hide and Seek game but that was shot down immediately!”

Chair of Shannon Group Rose Hynes was there on the day and she said that technology can evolve very quickly. “If you just think 20 years back, people weren’t even using faxes, they were using telex, it’s quite amazing. I was in GPA when emails became a big thing, it’s not that long ago.”

Gillian Barry, Enterprise Development Manager at LIT, also said that time generally brings huge advances. “If you look back at 1964 could they even have imagined living now? There’s no way they could have imagined online shopping, credit cards, 3- D printing, it’s incredible the amount of technology that’s out there. If we put that into context, what will the world be like in 50 years from now and how much is it going to change? We’re challenging people to come up with an idea about how we’re going to live, work, play, travel, learn in 2064 and we’re hoping that someone will come up with some really innovative, visionary idea.”

Keith Earls was very impressed with the event. “They’re a lot more creative than I was in school anyway. There’s some great stuff out there,” he said of the youngsters’ efforts.

Earls acknowledged he hadn’t been a committed student and that it’s something he regrets. “It was all sports for me in school, which is probably a bad thing. I wish I was a bit more open minded about it, looking back.”

While he may not have made the most of school the first time round, he said he intends to go back to studying before his career is over. “I regret not getting a proper education, I’m thankful that things have worked out for me rugby-wise but I’ll definitely be going back looking at education in the next couple of years.”

The Limerick man has been ruled out of the Six Nations and he said his focus now is on working his way back from injury. “It’s typical me over the last two years, bad timing with injuries. I’ll just work away on the rehab and keep the head up. It’s been a tough two years with injuries and hopefully this will be the end of it for a while. I think I’ll be well fit for the quarter final with Munster so that’s a bonus,” he said.

Owen Ryan has been a journalist with the Clare Champion since 2007, having previously worked for a number of other regional titles in Limerick, Galway and Cork.
Previous Clare students changing drink culture
Next Spring growth for garden festival