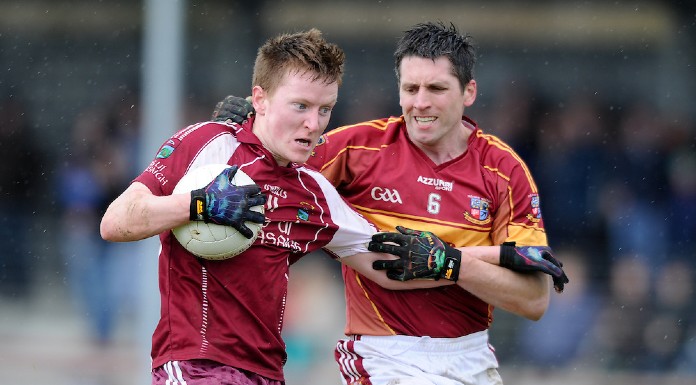 Francie Hayes & Gordon Kelly will do battle once more this weekend.

It is the battle of the maroons as these two go head to head with the county champions bidding for a fifth consecutive semi-final appearance.

It is somewhat reflective of the imbalance in the current senior championship structure that Miltown come into this one after two wins and a draw, while Lissycasey lost to Kilmurry Ibrickane before accounting for Corofin to book their spot in the last eight draw. That is a discussion for another day, but it also relevant in the context of assessing where each side stand ahead of this weekend.

It has been something of a stop-start championship for both to date, with Lisscasey having their free weekend in the second round meaning they had a month between their first and last group ties. Miltown on the other hand were in the four team group but their last round tie against Naomh Eoin-O’Curry’s was irrelevant in the overall context of the championship with David O’Brien’s side already through as group winners while the peninsula side were safe from relegation. It meant that county stars Eoin Cleary, Gordon Kelly and Cormac Murray did not feature, but it was still an experienced side that took to the field in Cooraclare that evening. While the result was inconsequential, it was an opportunity for some of the fringe players to make their impact but for the most part it was a disappointing performance. There were positives in the return to action of stalwarts like Seanie Malone and Shane Curtin who had been out through injury, which means the champions are adding to their strength in depth at a crucial time of the season.

Lissycasey were always in control of their tie with Corofin but yet there were still only four points between them until Conor Finnucane’s penalty at the turn of the final quarter. They went on to win the game comfortably but will be acutely aware that the level of opposition they face this time around will be significantly higher. Finnucane, Mikey O’Neill and Ryan Griffin did the most damage on the scoreboard while Killian Normoyle also chipped in with some good frees from distance.

Miltown will be braced for a challenge but on the balance of what has transpired in the championship to date they should have plenty to get by. The big guns will all return this weekend and with a clean bill of health to report, it means that there will be plenty competition for starting numbers. There is a strong spine to the defense with Sean O’Brien, Enda O’Gorman and Gordon Kelly in key positions while Conor Cleary and Darragh McDonagh form a potent midfield pairing. Lissycasey will need everyone firing on all cylinders and can only focus on trying to take the game into the closing quarter and ask questions of the holders. The fact that the game is on in Cooraclare will help their cause in keeping it tight at the back and they will make Miltown be patient in working the openings. They will not run way with it, but with leaders and match winners all over the field along with plenty experience to call on from the bench, it is hard to see anything other than a Miltown victory.

St Joseph’s Miltown’s latest step in the defence of their Clare senior football title comes this weekend when they take on Lissycasey for a place in the last four. The champions are unbeaten so far in the campaign, and rounded off the group stages with a draw against Naomh Eoin-O’Curry’s on a night when a number of regulars were rested.

It has already been a successful year for Miltown with the Cusack Cup sitting on the sideboard and manager David O’Brien is hopeful of further progress in the championship.

“At the start of the year the goal is just to get out of the championship group and it didn’t really matter how you managed to do that. It all evens out from here in terms of the quality of teams left in the race and seeing where you go from there. We came out of it without too many scares outside of the Kilmihil game and we were already qualified when we played the last game. It was all about just getting to this stage and it needs to go up from here. The back door is now gone and there are no more second chances so everyone will be looking to kick on” he noted.

Miltown will recall the big guns for this one with Eoin Cleary, Gordon Kelly, Darragh McDonagh and Cormac Murray among those rested for their final group game. Another of their county contingent, Kieran Malone, is an injury doubt as he manages a shoulder injury but O’Brien is confident they have strength in depth across the panel.

He said: “This group bought into something nearly 6 years ago now at this stage and they have become a group that you just provide them with the stuff and they soak it up. They nearly manage themselves at this stage and for us as a management it is just about providing them with what they need. There are enough leaders in that dressing room and they take ownership of it themselves”.

Lissycasey provide the opposition with recent history between the sides including in the final round of the Cusack Cup when Miltown were 1-15 to 1-6 winners. O’Brien feels it will be a much different prospect this time around.

“We met them in the Cusack Cup, the O’Gorman Cup and we played them twice in the Brian Casey tournament also so there will be nothing new appearing this weekend. They were down a few lads like Ryan Griffin and Mikey O’Neill when we met them in the Cusack Cup and the same in the O’Gorman Cup. It’s not really about the players missing though because both sides will have seen how the other plays so it will be a really tough prospect. At this stage of the year, you would love to get the performance but it really is all about the result. That is what it boils down to and I think it will be the same for all the eight teams involved at this stage in that it will be all about just getting to the next round. You would like to do it well and hit your targets of course but the result is the key one” he concluded.

2019 has seen a welcome turn in fortunes for Lissycasey as they prepare to take on the champions in this weekend’s Clare senior football quarter-final.

12 months ago saw them on the brink of dropping out of the top tier as they contested the relegation final where victory over St Breckan’s saw them retain their status. A disappointing Cusack Cup campaign followed as they were relegated to the Garry Cup with just one victory coming their way which was over fellow relegation candidates Cooraclare.

A narrow loss to Kilmurry Ibrickane in their opening championship game set up a winner take all tie with Corofin for a place in the knockout stages. A composed display two weeks ago was capped with Conor Finnucane’s late penalty as they booked their quarter-final berth.

Manager Ger Kelly is looking forward to the prospect of taking on the champions.

“It is a great opportunity for us I think and it is a chance for us to show what we can do against the reigning county and Cusack Cup champions so it is a game we are really looking forward to. We were relieved with the result against Corofin the last day and those round robin games were really about jockeying for position to get through to the quarter-finals because that is when the real championship starts. Our panel is getting stronger and I think we will enter the game with a lot of confidence but it is a huge challenge for us” he noted.

Lissycasey will look to county panellist Conor Finnucane to carry the scoring threat but he will have plenty back up with Aaron Griffin and Niall Kelly all capable of doing damage. Matt O’Shea continues to be a steady presence in midfield while a strong defensive spine is anchored by Gerry Moran and Ryan Griffin. Kelly feels everyone will revel in the opportunity to make the last four.

“Everyone wants to test themselves against the best and we have met Miltown already this year in the Cusack and O’Gorman Cups. They gave us a bit of an education on both those days but we are hopeful we have learned enough from them to be able to identify where their strengths lie and where we can hopefully expose a weakness or two and take advantage of it and be more competitive. You can’t beat championship games to develop players and they are in a good place at the moment. We have a lot of work done and the lads are in good shape and we are confident they will acquit themselves well this weekend” he said.

Kelly also feels that standard of officiating across the championship to date has contributed to the overall quality.

“Having been at a number of games in the senior championship this year, I think the refereeing in particular has been very good. Down through the years you might have seen the bigger names getting frees a little softer than most and the favourites to win these games getting the marginal calls. This year that has not been the case and the refereeing has been of the highest standard which is great for everyone involved” he concluded.