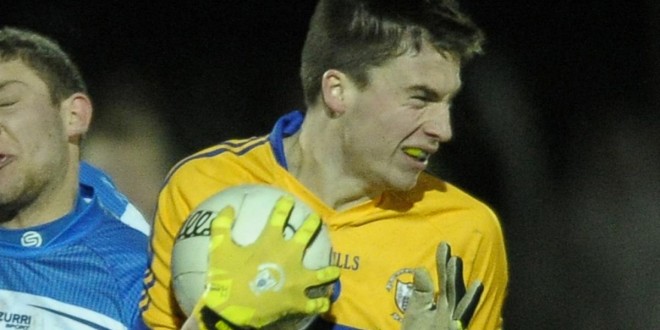 Clare fall to Tipperary in Thurles

DESPITE a valiant effort in Thurles on Wednesday evening, Clare exited the Munster U-21 Football Championship at the semi-final stage. Clare did not lack effort or commitment but the fact that none of their starting forwards scored from play underlines where they primarily fell short.
Although beaten by eight points in the end, 11 minutes from time Tipperary led by just four, 0-11 to 0-7, and Clare were still competitive.
Tipperary, however, kicked four points in the remaining minutes to pull away from Clare, who would have lost by more were it not for the goalkeeping excellence of Killian Normoyle. He made two excellent first-half saves and one late in the second period.
The winners led 0-7 to 0-4 at half-time, with Keelan Sexton scoring three of Clare’s points from frees, while Paddy O’Malley put the remaining point over from a dead ball.

An incisive move, in the 19th minute, instigated by Cian O’Dea and carried by Jamie Malone, set up Martin O’Leary for an effort on goal. The Kilmihil man hit a rocket of a shot that bounced off the crossbar and into the arms of a Tipperary defender. A goal at that stage would have changed the complexion of the half and perhaps of the contest in its entirety.
Although Tippperary were not overly impressive, they still found scores easier to come by. Midfielder Steven O’Brien put over two points from play, while Colin O’Riordan, Ian Fahey, Paul Maher, the exceptionally talented Jason Lonergan and Josh Keane added a point each.
Clare introduced Damien Burke to midfield just before half-time, while Conor Cleary was brought on at half-time, along with Maccon Byrne.
The visitors continued to work hard  in the second half, during which Jamie Malone, attacking from midfield, kicked two superb points. Unfortunately, the Corofin man was the only Clare player to score from play. In contrast, seven Tipperary men scored from play in front of an attendance of 640 people, in a match played in perfect spring conditions in Semple Stadium.
One Tipperary man stood head and shoulders above everyone in that second half. Commercials’ wing-forward Jason Lonergan kicked four second-half points from play, displaying his scoring class from an array of angles.
Keelan Sexton, from another free, was the only Clare player to score in the second half, along with Malone.
Tipperary will now play Cork in the Munster final. Clare can reflect on a decent, if limited, display. They defended well and conceded very few scoreable frees. However, all too often, they gave the ball away too easily and were punished on the break by Tipperary on several occasions.
Cillian Normoyle, Jack O’Dea, Darren Nagle, Jamie Malone and Conor Brennan did well for Clare on an evening when their desire couldn’t be queried but it was not matched by their attacking capabilities.