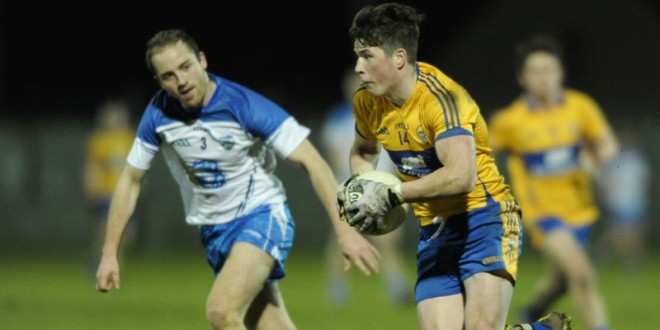 Clare coasted into next Wednesday’s Munster U-21 football semi-final meeting with Tipperary in Thurles, following a facile win over Waterford in Miltown.

Played in front of an attendance of 518, Clare restricted Waterford to just a single second-half point. Clare put the game away in the opening three minutes of the second half, when Jamie Malone raced through for a superb goal. Prior to that, Keelan Sexton had put over a nice point from play, set up by Dale Masterson. Malone won the subsequent kick-out and buried his second goal. Sexton followed up with a superb left-footed score, putting Clare into a 2-6 to 0-2 lead. Waterford had battled gamely in the opening half but following Clare’s burst after half-time, the confidence and ambition visibly drained from their opponents.

Malone’s first goal, six minutes before half-time, helped Clare into a 1-4 to 0-2 interval lead. The goal opportunity was presented to the Corofin man following excellent work from Kilmihil’s Martin O’Leary, who turned over Waterford as they attempted to break clear. O’Leary passed the ball across goal, laying on a simple goal opportunity for his Clare senior colleague.

Waterford were held scoreless until the 21st minute when Conor Gleeson pointed, while his attacking colleague, Conor Murray put over the visiting team’s second point, four minutes before half-time.

Clare enjoyed plenty of first-half possession but were sometimes a bit slow in delivering it to their inside forwards. While Keelan Sexton started at full-forward, he was moved outfield in the opening half, where he got onto plenty of ball and drove forward.

Overall, this was a very comprehensive win for Clare and indeed the county’s first win at this level since 2011. While it must be noted that Waterford were very limited, there were some notabe displays from Clare. Jamie Malone looked very dangerous breaking from midfield and his second goal was the best score of the evening. Keelan Sexton put over some fine scores and while Maritn O’Leary didn’t score, his work rate was impressive and he always made himself available.

The Clare defence were not under any pressure but did what they had to do. Of course, they will face a much more searching examination next Wednesday in Thurles when Clare meet the home county for the third successive year at this level. Clare were beaten in 2013 and 2014, so will be very keen to have a real go at Tipperary.

West Clare native Peter O'Connell has worked for The Clare Champion for 12 years and covers everything from sport, especially GAA, news, features and has been even known to branch into the fashion scene on occasion.
@@westclarepage
Previous Keep dogs under control
Next Cratloe PO to stay open