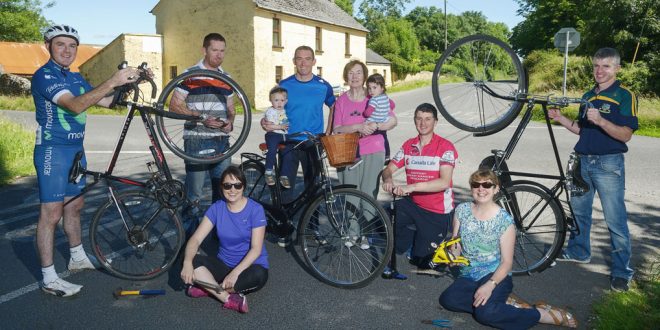 At the launch of the Cathal Cycle 2016 in memory of the late Cathal Forde of Gort, to raise funds for The Cormac Trust and MS Ireland, which is on from 28th July to 31st July and involves a 400mile cycle from London to Gort. From left; Donal Mc Namara, cyclist, Enda and Conor Harrison, brothers of Noel Harrison, Mrs Brid Harrison, Young Lucas and Heather Harrison, Liam and Sean Forde, Gort, brothers of Cathal Forde, with Marie Mc Namara and Betty Murphy, cyclists. Photograph by John Kelly.

SEVERAL club members and the wider Clooney community will tog out next week – not to fulfil a GAA club fixture but to lend a helping hand to fundraising efforts for a fellow parishioner.

When Kilburn Gaels lifted their first ever London championship trophy in 2010, they were coached by Clooney clubman Noel Harrison. A key player on that championship-winning team was Gort’s Cathal Forde.

Fast forward 18 months and all associated with the London club were utterly devastated when Cathal collapsed and died at a training session. It subsequently emerged that he died as a result of Sudden Adult Death Syndrome (SADS).

Some time later, Noel Harrison was diagnosed with Multiple Sclerosis. He will soon be returning home to Clooney permanently and will receive ongoing treatment provided locally by MS Ireland.

Following Cathal’s death, the Cormac Trust, a group set up following the similar death of Tyrone footballer Cormac McAnallen got in contact with the Forde family, and provided vital support and advice during their traumatic time.

Four years on, to honour and remember Cathal, a number of his teammates, friends and family have come together and planned The Cathal Cycle 2016, a 400-mile route, starting in Highgate, London.
The 13-man team will set off on their journey on Thursday, July 28, cycle across England, Wales and Ireland and finish in Cathal’s home town of Gort on Sunday, July 31.

This group intends to raise funds for The Cormac Trust, so they can continue their superb work in raising awareness of SADS, provide screening programmes for teams in both Ireland and England, along with a number of other vital services.

When Kilburn Gaels contacted Clooney/Quin, inviting them to take part in The Cathal Cycle 2016, the club quickly set about planning a number of events to coincide with the charity cycle.

On Thursday, July 28 at 7.30pm, the day the cyclists depart from their Highgate training ground, Clooney/Quin GAA will hold ‘A Stroll for Noel’, a 6km walk where both club and non-club members are invited along to show support for the Forde and Harrison families.

A feature of the event will be a pair of gents and ladies high nelly vintage bikes, restored by the Harrison family. Refreshments will be served afterwards.

For those who may not have the fitness levels, a less taxing 30km cycle is planned, departing from Clooney/Quin GAA club grounds at 3pm. All going to plan, all cyclists are expected in Gort around 6pm.
Those who would like to take part in any of the cycling events can contact Pat Ryan on 087 2906766.

Further information on The Cathal Cycle is available on www.cathalcycle2016.com.