A BURSARY in memory of a young Caher musician and teacher will be boosted this year by an online performance and fundraising challenge, running over the next fortnight.

Eimear Noonan died tragically after a fall while out running in Annonay in the south of France, were she worked at Font Chevalier Primary School. The passing of talented musician in November 2017 prompted her family to set up The Eimear Noonan Music Bursary to support others in their musical studies. The Carpe Diem concert, also became an annual event, held in November, in Eimear’s memory.

Covid-19 restrictions have meant that a formal gathering this November isn’t possible, so instead, Carpe Diem has gone virtual and singers and musicians across the county are being invited to share their performances on social media between November 1 and 15. Performers are asked to post a video of a performance to Facebook, Instagram, Twitter or TikTok, using the hashtag #CarpeDiemSingAndPlay. They can then nominate others to get involved and contributions can be made online at idonate.ie/carpediemsingandplay.

All proceeds from the virtual Carpe Diem event will support the Eimear Noonan Music Bursary and applications to the fund are also invited up the closing date of Friday, November 6. The award winners will be announced after the virtual event.

The inaugural Carpe Diem was launched in Gort two years ago. Since then, the fund has provided bursaries of €1,000 to third-level students from counties Clare and Galway, and aims to continue to do so into the future.

The Carpe Diem event was originally conceived by Katharina Baker and Fiona Buckley of Coole Music to celebrate Eimear’s participation in the School of Music, particularly in her role as leader of the Youth Orchestra. The concerts in 2018 and 2019 celebrated music in all its genres, spanning the classical, orchestral, trad, folk and rock genres. Performers included Coole Music Youth Orchestras, UCC Orchestra, Gort Community School Choirs and ensembles, along with a number of Eimear’s close friends.

Eimear was the only daughter of Mary and Flan Noonan, and sister of Michael, Declan and Cathal. From a very young age she showed huge musical promise. Under the tutelage of Sr Mary Brosnan in Gort, Eimear received two national High Achiever awards from The Royal Irish Academy of Music. She also joined the Coole Music Youth Orchestra and had the honour of leading the Orchestra under the baton of Katharina Baker at The Irish Association of Youth Orchestras (IAO) Festival of Youth Orchestras at the National Concert Hall in 2012.

While studying languages at University College Cork (UCC), Eimear worked to revive the college orchestra and had the distinction of chairing it in the final year of her studies. She had been planning to complete a Master’s degree in music after her time teaching in France.

Full details of The Eimear Noonan Bursary and Carpe Diem 2020 are available at eimearnoonanmusicbursaryaward.net.

Fiona McGarry joined The Clare Champion as a reporter after a four-year stint as producer of Morning Focus on Clare FM. Prior to that she worked for various radio, print and online titles, including Newstalk, Maximum Media and The Tuam Herald. Fiona’s media career began in her native Mayo when she joined Midwest Radio. She is the maker of a number of radio documentaries, funded by the Broadcasting Authority of Ireland (BAI). She has also availed of the Simon Cumbers Media Fund to report on development issues supported by Irish Aid in Haiti. She won a Justice Media Award for a short radio series on the work of Bedford Row Project, which supports prisoners and families in the Mid-West. Fiona also teaches on the Journalism programmes at NUI Galway. If you have a story and would like to get in touch with Fiona you can email her at fmcgarry@clarechampion.ie or telephone 065 6864146.
Previous Fourth times the charm for Supermacs’ motorway plaza plan?
Next US company to create 25 jobs in Shannon 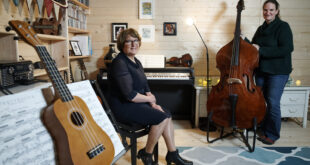 Family of Eimear Noonan Prepare to Bring her Home