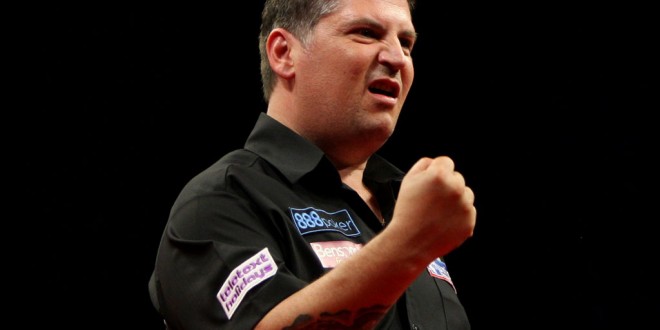 World darts champion, Gary Anderson will appear at The Grove, Roslevan this Saturday to raise funds for Pieta House.

PERHAPS the most entertaining night’s sport that will be seen on TV in 2015 came in the early days of January, as Gary Anderson won the World Darts Championship, pipping the legendary Phil Taylor, and overcoming some ferociously bad luck in the process.

Taking on the 16-time World Champion, the Scot would have felt he’d need every scrap of good fortune going but, instead, he suffered bounce-outs and Robin Hoods (where darts rear-end each other for no score) galore, before eventually winning 7-6, taking the world title for the first time.

Millions watching on Sky felt the title was slipping from the Flying Scotman’s grasp as the night went on, and the champion admits he shared their fears.

“Aye, yeah, everything was against me, the three darts falling out – you know, at one stage I said it’s definitely not meant to be. That was the way my luck was going but I just stuck in. In the second leg of the final set, Phil missed a couple of darts at doubles. I finished it to go two nil up and I just held my own throw.”

While he may have felt his chance was fading, he says it actually didn’t affect his nerves and he just concentrated on his scoring.

“I’d made it to the final of the Worlds and to me that’s as good as it gets. Win it or lose it, I was still in the final, playing the best player that probably ever walked the planet. I was as calm as a cucumber. At 6-6, it kind of changed. I thought I’d blown it but I stuck in and got the win.”

No longer the bridesmaid, the 44-year-old was obviously delighted at the triumph, but he says he isn’t driven by any great desire for titles or success and beating Taylor in that epic final hasn’t changed his life.

“Not really, all it means is I get a bit of grief now! There’s a big target on my shoulders! I’m a bit different from other players, I just play darts for the fun of it and always have done. Everyone used to say you should have won the Worlds, but I went, ‘well if I never win it, I never win it’. But it was nice to finally get my hands on it and playing Phil in the final made it even more special.”

Even the financial rewards which followed, and which go beyond the Stg£250,000 winner’s prize, haven’t made a dramatic difference, he claims, as money wasn’t a problem beforehand.

“I’ve always done well at darts. It was one big payday but, over 15 years, I’ve been very lucky. Everyone says the money doesn’t matter – of course the money matters but I, more or less, play darts for my kids now, try and help them out. I’ve got a 21-year-old, a six-year-old and a 16-month-old so I’m trying to provide for them when they’re older. That’s why I keep playing now.”

In darts, there’s no chance to shoulder your opponent, hook him, slide tackle him or nudge him when the referee isn’t looking. While there’s relatively little you can do to stop your opposite number, dart players do find ways to get an advantage, be it by playing to the crowd or interrupting a player’s rhythm.

Although respect between the top player’s is usually apparent, Anderson says the competition among what is a relatively small circle is very keen.

“When we’re on that stage, there are no friends. Your friends will take your wages off you, that’s the way we kind of look at it. When we get on stage, there’s no friendship. You’ve got to win, everyone wants to win. I used to be a bit soft about playing friends but then I realised they’re taking food out of the kids’ mouths.”

Obviously, winning a first world title made for the ideal start to 2015, and Anderson’s good form continued, as he won the Premier League in May.

He says that when he beat Dave Chisnall in the semi-final, he felt the hard part was done, although world number one, Michael Van Gerwen stood between him and the title.

“Playing Chizzy, I was very lucky at the end. He had about three darts at double 16 and missed. I had to take out 116, which I did. When I got to the final against Michael, I said, ‘That’s it, I’m not going to lose now’. I like playing Michael, he plays at my kind of pace. Chizzy was my bogey man. He had played so well against me the two times we played in the Premier League.”

Anderson acknowledges he can still struggle when opponents seek to slow things down. “I like the fast games, players who just get up and get on with it. That’s the way I’ve always played and I do struggle if the pace is a bit off. I kind of lose interest in the game. I’m still learning, I’ve played the game a long time and I’m still learning. You never stop learning.”

Nearly all of the world’s top darts-players – the likes of Van Gerwen, Lewis, Taylor, Van Barneveld et al – share a similar physique to Anderson, a body shape that he describes as “cuddly”. The Scot has a theory on why the same build is so common among the top players.

“We’re on the road six nights out of seven. We travel through the night and where can you get decent food at two o’clock in the morning? There’s nowhere. We’re eating at the wrong times. We’d be walking around cities all day but, at night time, you’d be sitting in cars for seven or eight hours and there’s not much on the menu when you’re driving throughout the night.”

While the diet mightn’t be the best these days, he is pleased that throwing darts allows him to take it easier than he could when he was working as a builder, something he did for 19 years.

“Getting up at five o’clock in the morning and going to work. No, no, I don’t miss those days. I miss getting the work clothes on and, if there’s anything to be done in the house, I do it myself. I still like to get the tools out and to keep my hand in. But getting up at five in the morning, no, thank you!” Anderson chuckles.

Gary Anderson will be at The Grove in Roslevan on Saturday evening from 8pm. All proceeds from the evening will go to Pieta House. For further details, contact Ciaran on 087 2961897.