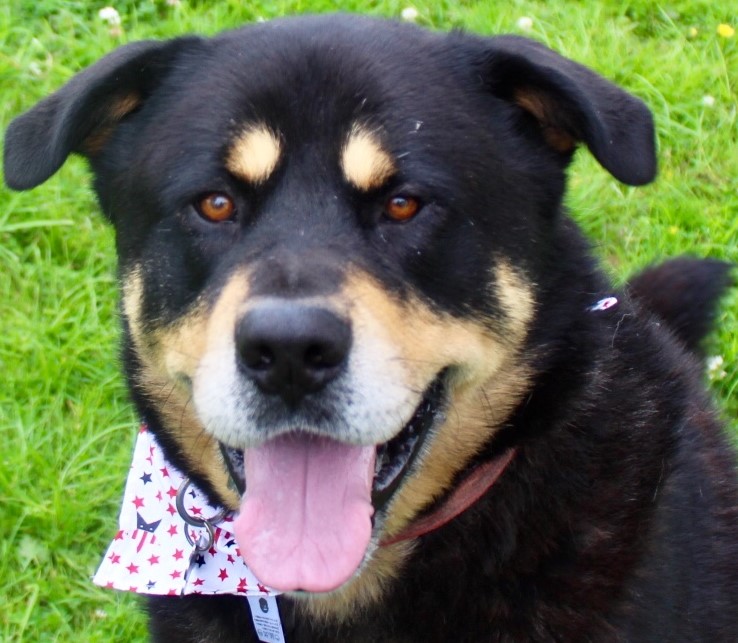 Sometimes good things come in big packages. That was the case when Bruno, a five year old
Rottweiler Husky cross came into the care of Clare Animal Welfare. Having spent most of his
life tied up on a chain, Bruno, who weighs in at a hefty 50 kilos was relinquished to a
concerned neighbour by his owner who got in touch with Clare Animal Welfare (CAW).

“Our first priority,” says Judy, one of CAW’s volunteers, “was to get Bruno checked over completely by
our vets.”

Bruno was found to be in remarkably great physical shape despite his tough first
years. Neutering, microchipping and vaccinations were next for this gentle giant. Bruno’s
next steps towards his new life were into foster care with Stiofan and his wife Christine who
are veteran foster carers, for Galway SPCA, Madra and now with CAW. Stiofan says: “Bruno
missed out on a crucial stage of socialisation because he had so little contact with people or
other animals. He was so overjoyed to be off the chain that he would just bounce around
the field.”

Bruno didn’t know how to play, toys were new to him. “But he is a quick learner
and soon realised how much fun it is to fetch a toy and (almost) bring it back. He is so gentle
with his toys that I guess he could bring back a raw egg intact.”

Despite being chained up for more than four years Bruno is still incredibly happy just to be with humans.

Stiofan and Christine, who at one point were fostering three greyhound puppies and three collies, have been
working with Bruno to get him ready for adoption. “He is really eager to please”, says
Christine. “His recall is improving every day and he now sits, waiting patiently for his dinner
and his treats.”

“What we want for Bruno more than anything,” adds Stiofan, is for him to be
at the centre of his new family. He won’t suit everyone so we see him with a family with
older kids or adults only who are used to large breeds.”

Will they be sad to see him go? “Of course,” says Stiofan, but we really think this guy deserves the best after everything he has
been through. We owe him that.”
If you are interested in adopting a dog from Clare Animal Welfare, please complete a pre-
adoption form that you can find on www.clareanimalwelfare.ie or on their
Facebook page. Clare Animal Welfare are also looking for fosterers as they believe a home environment to be
the perfect place to prepare a rescue dog for its new life. Contact them if you want to get
involved.  Clare Animal Welfare operate a 24/7 helpline: 085-1911369