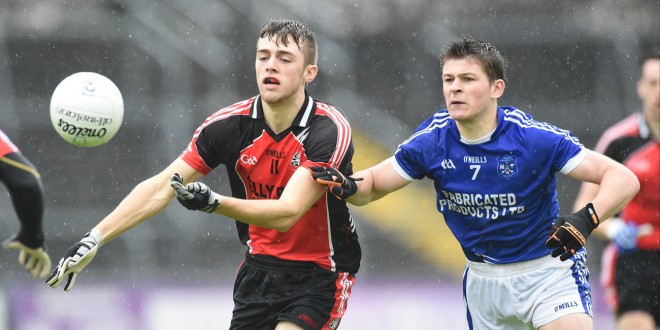 Cillian Brennan in action for Clondegad. Photograph by John Kelly.

CILLIAN Brennan has just turned 21 and has a few things on his mind. In the short-term, he is thinking of Kerry and how best to effectively monitor inside forwards like David Clifford, James O’Donoghue and Paul Geaney. Beyond Sunday though, Brennan, who is the younger brother of captain Gary and Shane, is on the hunt for a job.

A recent Mary Immaculate College, Limerick graduate in primary teaching, ideally he would like to apply his trade in Clare or at least the mid west region..

“I’m on the lookout for a job at the minute and trying to get the foot in the door and get the face out there. Hopefully, I’ll get somewhere close to home come September,” Brennan told The Clare Champion after training in Caherlohan on Sunday morning.

Before that though he will play his second championship game for Clare in what is his début season. He is the first Brennan to play as a back and in fact, until last year, Cillian was a half-forward. He definitely did not envisage turning himself into an inter-county full back and until this years NFL division 2 campaign, he had rarely pulled on the number three shirt.

“Maybe a game or two in hurling (with Ballyea) but very little apart from that. But we always would have focused on the basics. As a footballer, when you don’t have the ball, you’re a defender. I’m just trying to apply that in the backs and get used to it. In the league we got the chance to settle in and I’m by no means the finished product, it’s a start anyway. I’m delighted to be getting the chance to get a run out. It’s a great chance to learn and to develop. I’m glad to be getting that run and fighting for a place. It’s not exactly where I saw myself but it’s great to be part of it it,” he smiled.

Clare will play Kerry for the third successive year on Sunday, on the back of a second year in division 2 of the league. That has to help as they seek their first win over Kerry since July 1992.

“That’s where you want to be. You’re challenging yourself to put yourself up against the best possible players. But even in training, you’re coming up against great forwards. There are so many there now, you’re always being put under pressure and there’s always a challenge. I’ll take it as I’ve taken every game throughout the league. You try and get the basics right and focus on your own game. You’re going out against a man for 70 or 80 minutes. It’s your job to stop them and leave the jersey in the best place possible and do everything you can for the team,” Brennan said.

Against Limerick he lined out alongside 34 year old Gordon Kelly, while his brother Gary, Cathal O’Connor and David Tubridy have a good few years on him.

“Some of them mightn’t like to be told that they’re of an older generation! They’re hanging on to their youth while they can. There’s a good balance there and there has been a good mix this year. We’ve all been delighted to get the chance and it’s the older guys who are pushing us and trying to guide us. We possibly have that bit of innocence coming in, which is no harm at times,” Clare’s young full back observed.

West Clare native Peter O'Connell has worked for The Clare Champion for 12 years and covers everything from sport, especially GAA, news, features and has been even known to branch into the fashion scene on occasion.
@@westclarepage
Previous Clare vote vastly different to previous referendums
Next Footballers outclassed in Killarney