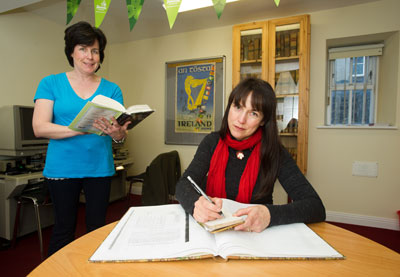 TG4 recently featured a Canadian woman with Clare roots as part of its Tar Abhaile (Come Home) series, which focuses on the Ireland Reaching Out initiative.
Brenda Cavillin (nee Killeen) came to County Clare this past week to watch the programme with the family members she has managed to connect with through the series and with the help of Tulla’s Reaching Out volunteers.

Brenda is a direct descendant of James Killeen and his brother, Rev Charles Killeen, her third great-grandfather and her third great-granduncle, whose roots are in West Clare.
Through her research and some happy coincidences, Brenda learned that their father, Thomas Killeen, enlisted with the British Army in 1808. After giving seven years service fighting in the Canadian War of 1812, he became eligible for a land grant in the Perth District in Canada.

However, he instead opted to come home to his wife and son, James, buying a farm in Newtown, Tullaher, near Kilkee.
“I’ve become truly fascinated with the piecing together of my family’s story of sacrifice, vision, survival and faith and discovering how these stories ever survived to be told, realised and lived,” Brenda said.

At the height of The Famine, Thomas’s son, James (Brenda’s third great-grandfather) took  up the opportunity of settling on the land in Canada in 1844, followed by his wife, Johanna and their only child, Michael Charles, in 1849. Michael and Mary Killeen settled in Stanleyville, Ontario, the Irish community outside the nation’s capital of Ottawa.
Brenda’s interaction with the Tulla Reaching Out volunteers occurred when she learned of Rev Charles Killeen, her third great-granduncle, who was a curate in the parish of Tulla during The Famine but who tragically died in 1848, aged 32, after just one year as a priest.

She said she found Rev Charles’ story especially intriguing. “I was moved by his story that he died so young,” she noted.

Jane Halloran Ryan, chairperson of Tulla Reaching Out, had been helping Brenda with researching the reverend’s history.
“I went about doing a bit of research with regard to it. There was a small obituary regarding Rev Charles, who had served in Tulla during The Famine for a short period of time. He had become ill tending to his parishioners while The Famine was raging and disease was raging as well in Tulla. He had been taken by his father to recuperate at his home near Kilkee but had died,” she said.

The obituary, dated Wednesday April 12, 1848, stated, “His divine mission, while in discharge of the arduous labours that pressed on him, has been characterised by an untiring and zealous attachment to the temporal as well as the spiritual interest of the many famine-stricken beings, an over zeal in whose cause rendered more impetuous the progress of the fatal malady that bore him prematurely away”.

Janes noted, “It got us thinking about The Famine in Tulla. This was before there was a workhouse in Tulla, there was a fever house. He was only a priest for one year”.
“What is so great about this project is the connection back to families. This is Brenda’s third trip back in 15 months. It’s the connection that people make back, it is just a terrific project that is going from strength to strength,” she continued.

In June 2012, Brenda and her husband came to Ireland for the first time as delegates at the Eucharistic Congress, representing their diocese in Stanleyville, Ontario. The visit also fell on Brenda’s birthday. On arrival here, a remarkable series of events came about.

“I had gone on ancestry.ca and there was a message board posting with the initials pmk. This person had found a mortuary card in his attic in Ennis for a Thomas and Bridget Killeen, who were the descendants of the Canadian Killeen family. It was unbelievable,” she said.

However, when Brenda tried to message him back, his account was dormant.
“I decided to at least print out what I had, a picture of my great-grandparents and I was going to do this cheeky thing, go to Ennis and make posters and have something to the effect of ‘last seen boarding a ship in 1849 anyone who knows the whereabouts contact Brenda Killeen’. But I didn’t have to resort to that because I met up with a man at the Congress called Ray McNicholas,” she said.

Ray’s friend Peter O’Keefe had been on a conference call and one of the people on the call said they were off from Ennis to Dublin the next day.
“He said I have this Canadian woman who is looking for Killeens in Ennis and she said ‘well I’m a Killeen’. He told her the story and she said, ‘oh my gosh, that it my cousin’,” Brenda said.

This woman advised that a relative of hers, Patrick Martin Killeen had been looking for the Killeens in Canada and he was the one who had posted to the message board.
“By the end of the week, we were travelling to Ennis and spent the day meeting the Killeens,” Brenda said.

While she had not yet found the direct connection to the Ennis Killeens, they did bring Brenda to the farmhouse where her third great-grandfather was born.
“I thought that was an unbelievable gift,” she said, but they had another surprise in store as when Brenda arrived, she was introduced to her direct Killeen relations.

“It was unbelievably moving. There were moments – where my cousin, Andrew, walked in and his wife said ‘this is your cousin Andrew’. The second he walked into the room, he had the mannerisms of my brother, James,” she said.

Andrew is a direct descendent of John Killeen, the youngest brother of James and the Rev Charles. His family still live on the 200-year-old farm in Newtown, Tullaher, which Thomas bought when he returned from Canada.

As she was leaving that evening, Brenda saw an aerial photograph of the family farm on the wall and noticed Kiltenane graveyard.
“I asked Andrew about the graveyard and he said ‘that’s where all of your ancestors are buried’ and that’s where my father is buried and I said ‘I guess there is an excuse to come back’,” she said.

In advance of this trip, Andrew’s mother, Mary, checked for Thomas’ grave but could not find one. They now believe the family vault may have been erected after Thomas was buried.  However, she did confirm that the Rev Charles Killeen was brought from Tulla to Tullaher to be buried, but as he was not a locally serving priest, he could not be buried at the local church grounds. Instead, he became the first priest to be buried in The Priests Cemetery, opposite Kilkee church.

Brenda now hopes engravings by a P Cusack that she found on Rev Killeen’s grave and on the family graves might be common to the family headstones.
“Thomas’s grave is still a mystery and so I thought they might have used the same carver for the family, so we might be able to trace this P Cusack,” Brenda said.

She said it has been very emotional and enlightening.  “I went for a run at my family’s place, I wanted to get out before the sun came up and I ran up around the back field near the graveyard and it is just this beautiful, rolling hill and I took this amazing shot of the sun on the horizon.

“My cousin said that his father, John Killeen, had stood many times after working and he would take his quiet time in the field. I said I need to stand in the field where my ancestors stood, that’s holy ground.

“It is a very emotional thing to journey home and see that vista with your own eyes,” she concluded.