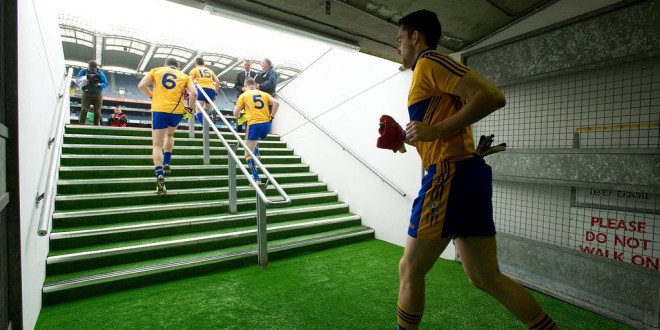 The Clare team head out on Croke park turf before the Division 4 League final against Tipperary in Croke Park. Photograph by John Kelly.

The highlight was a magnificent goal, early in the second half from Kilmihil’s Martin O’Leary who was played in by fellow U/21 Jamie Malone.

At that stage Clare led 1-11 to 1-8 and backed by a strong wind, it looked as if their first appearance in Croke Park since 2004 would end in victory. However they added just four points in the closing half hour with Tipperary tagging on 0-8 during the same spell. The game was watched by a crowd of 8,654 people.

Conor Sweeney was the winners main man in attacking scoring their goal in the opening half and kicking an array of impressive points.

Tipperary led 1-7 to 0-9 at half time, thanks to Sweeney’s 19th minute goal. In fact were it not for two excellent blocks from Kevin Hartnett, Tipperary could have scored at least one further first half goal.

At the far end Shane McGrath kicked four magnificent first half points and while he kicked four wides in total, the Thomas Davis clubman showed his class on the big stage as did David Tubridy, who lit up GAA headquarters with some superb points from play.

As the second half developed Clare gave away possession on a number of occasions while their discipline in the tackle also deteriorated as the game wore on.

They lost Shane Hickey to injury in the second half, while Joe Hayes also replaced Pierce Deloughrey in goals midway through the second period.

Speaking to The Clare Champion  afterwards Clare manager Colm Collins said that the defeat was down to sometimes not sufficiently protecting the ball.

“It’s disappointing to lose. I thought our lads played well and did a lot of very good things but we turned over the ball too much and we paid the price,” Collins said.

“You’ve got to keep the ball against decent opposition and you don’t get away with things like that. So we’ve got plenty of things to work on before we play Waterford on June 8,” he added.

West Clare native Peter O'Connell has worked for The Clare Champion for 12 years and covers everything from sport, especially GAA, news, features and has been even known to branch into the fashion scene on occasion.
@@westclarepage
Previous Mistaken Identity
Next Storm Christine