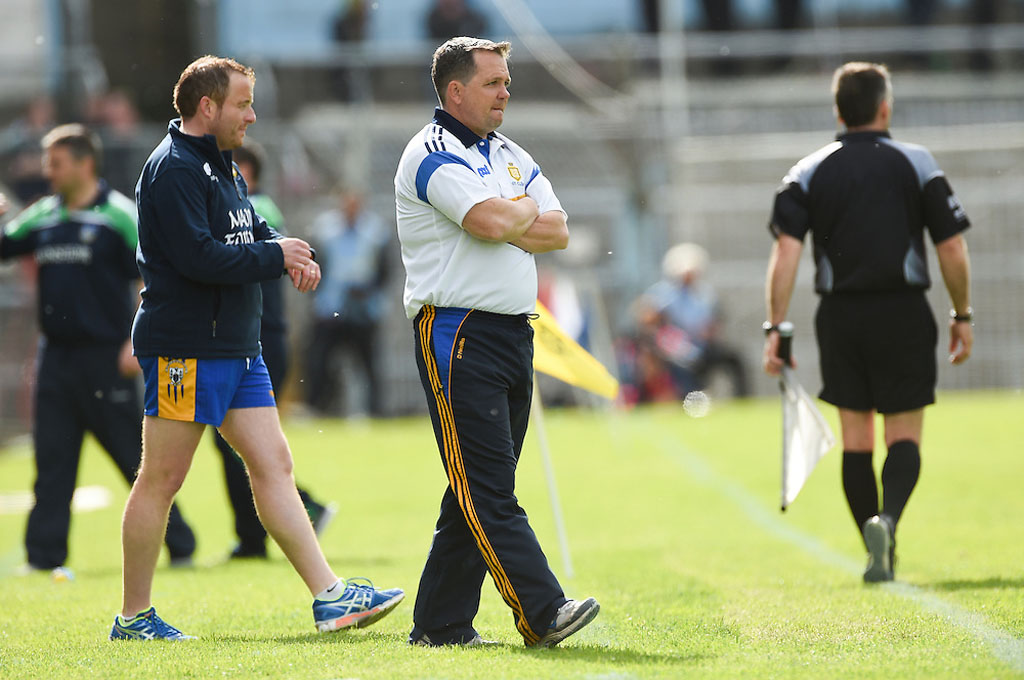 Wexford’s main aim for this season’s National Hurling League is to retain Division 1 A status, according to team mentor Seoirse Bulfin.

Speaking to The Clare Champion this week, he noted that “Wexford are finding their feet in Division 1A. It’s a very new experience for the Wexford players”.

“We have made a good start but things didn’t work out on Saturday against Tipperary. Our main aim is to stay in Division 1 A and that’s still in our own hands. In the grand scheme of things, we take each game as it comes,” the Limerick native continued.

A member of Davy Fitzgerald’s backroom team where ever he has been over the past decade, Bulfin is “not surprised that Clare are up at the top of the league”.

“I worked with Clare for five years and they are superb hurlers with a great attitude. They are well seasoned in Division 1 A and all but one or two of the panel have national league medals. They are playing great hurling and are very hard to stop when the find a rich vein of form like they have at present. They are getting their half-backs up the field and that causes trouble for teams”.

Given that he and Fitzgerald spent a number of years in charge of Clare, will it be difficult to be on the opposing side this week?

“I am used to it at this stage. When I was with Clare, we came up against my native Limerick on many occasions. I know the Clare lads well and I am still very good friends with them. David Reidy will be in front of me in class at LIT shortly and so will Peter Duggan. You don’t spend five years with a group without forging a relationship with them but Davy and myself have jobs to do in Wexford and we will try and do that to the best of our ability.

“It will be strange. It will be the first time since we finished with Clare that we will be up against them. Davy is a Clareman through and through; he is very passionate about his county. It will be difficult enough for him,” added Bulfin, who went on to point out that “the only player in the Clare panel that I haven’t worked with is Niall Deasy”.

Asked about the new format for inter-county league and championship, Bulfin said, “It’s a bit soon to judge but, personally, I believe it’s a great format. Players want to be playing as many matches as possible. People must give the system time to bed in. It will be difficult, particularly for counties with smaller panels, to manage injuries and recovery but, at the end of the day, all players want to be playing matches”.

Looking ahead to Sunday, Bulfin said, “We will be down eight players that played in the championship last year. Liam Óg McGovern is a long term injury, Willie Devereaux had to pull out of the warm-up at the weekend and we have three players – Paudie Foley, Joe O’Connor and Aaron Maddock – involved in the Fitzgibbon Cup final with DCU against UL on Saturday.

“Wexford Park won’t hold too much fear for Clare. They were here two years ago and won well. Clare are guaranteed their status for next season. Getting to the quarter-final would be a bonus but we are not looking that far ahead. We have a tough run-in with Clare on Sunday and Kilkenny a week later and they are starting to find a bit of form.”

Neither management will finalise their starting line-ups until later this week but Clare joint manager Donal Moloney hinted last week that they will make some changes and that they will be giving consideration to the involvement of a number of the panel [Tony Kelly, Conor Cleary, David Fitzgerald and Ian Galvin] with UL in the Fitzgibbon Cup final.

Clare went into this season’s league wanting “to be competitive and determined to advance as far as possible while, at the same time, building confidence and consistency and settling players into vital positions”.

With maximum points from three outings under their belts, joint manager Gerry O’Connor feels like there is a bit of pressure off this week.

“We have been focussing on the league on a game-by-game basis. We have five games to play and we are taking them one at a time, trying to instill confidence in the team.
“Jamie Shanahan, Paul Flanagan and Bobby Duggan rejoined the squad in full training two weeks ago. Cathal McInerney is almost ready to resume. Rory Hayes is in rehab for a back injury and he is probably the most frustrated of the lot, as he played really well in the Fenway Tournament in Boston and in the first two rounds of the Munster league. Oisin O’Brien is struggling to shake off a knee injury, while Aron Shanagher is a long-term injury.”

The Éire Óg clubman is looking forward to Sunday’s contest. “The fact that it’s a four-hour journey brings its own logistical challenge, but it is beautiful pitch to play on. It’s a fabulous venue and we are really looking forward to the challenge we are going to get.

“For the first two weeks it was easy enough to pick the 26 match-day squad, as many were ruled out due to injury but as players return to full training, it’s more difficult. The team is picked on form and Mikey (O’Malley) and Niall (Deasy) came in last Sunday based on their form at training. The others on the panel will see that if they perform, they will get into the side and that is a great boost for the guys who are trying hard,” he said, before confirming that the team will be not be named until Friday night or Saturday.

Clare may well have sealed their Division 1 A status for next season but they will still want to keep their winning run going. With Jamie Shanahan and Paul Flanagan back in training following injury, they may well get some game-time this week, while Jason McCarthy and Darragh Corry, who were introduced last week, may also see action.
Clare’s form to date has been impressive and they are entitled to the favourites’ tag. That said, Davy Fitzgerald will be keen to seal Wexford’s Division 1 status for 2019 and in front of what is expected to be a big home following, they are sure to be determined to overcome the league leaders. Given that they have to go to Kilkenny on Sunday week, the Slaneysiders will be keen to get the point this week.

Darragh Healy Bidding To Follow In His Father’s Footsteps