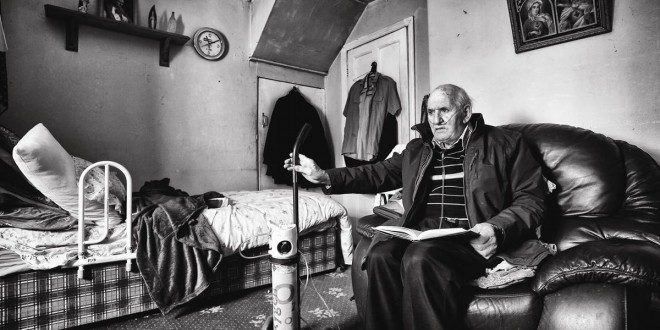 Cyril Quinn at his home in Hermitage, Ennis. Photograph by John Kelly

Dan Danaher
Exclusive
PEOPLE living near nine asbestos dumps in West Clare should not attempt to examine or remove it, an Ennis pensioner, who has contracted the life-limiting asbestosis disease, warned this week.

Seventy-nine-year-old, Cyril Quinn made the call, as Clare County Council continues its investigations into the alleged dumping of asbestos on public and private lands in Kilrush and Kilkee.

Mr Quinn stressed that only personnel who were qualified to remove dangerous substances should be allowed to handle asbestos, once they were dressed from head to toe in protective clothing.

Cyril requires an oygen supply practically on a 24-hour basis and needs to go on a nebuliser four times a day. His sitting room had to be converted into a bedroom as he is no longer able to climb his stairs.
He said a neighbour of his died from asbestosis, while it has also claimed the lives of other Irish people who were working with asbestos in England down through the years.
Cyrilcontracted asbestosis while he was working with asbestos in England during a six-moth period in 1952. Absestosis is a chronic and fibrotic medical condition affecting the lung tisse caused by inhaling and retention of asbestos fibers. There is no known cure.
“Asbestos is highly dangerous. It is lethal and pentrating Anyone is taking their lives in their hands by going near asbestos. I pity anyone who is living near asbestos.

“People should keep away from it. It floats like a feather in the air. It will stick on your hands. Any person will not be able to see it with the naked eye, but it will still be present on your body. You could still be inhaling it a few days later without even knowing it,” he warned.

“I know it is going to kill me. I have had a good innings and I am ready for it. I have had a good life. There are thousands of people worse than me. Any day I can get up is a good day for me. I don’t want to be a hindrance to people,” he said.

“Once asbestos gets into your system, you can’t get rid of it. It eats through your system and is like little pin going through your lungs. It is only marking out the time when you are going to die.
“I get a fit of coughing. The nebuliser helps me get fluid out of my lungs,” he added.

About nine months ago, he sustained a terrible fall in his sitting room just inches away from the hearth in his fireplace late one night and was left lying in a pool of blood for eight hours overnight. He was shouting at his one of his neighbours for assistance but unfortunately they couldn’t hear him.

In addition to sustaining a gash on his head, he was hospitalised for treatment at Ennis hospitdal.
“I fell down on the floor. I was so weak I tried to get my hands up but I couldn’t. I was there for eight hours until the morning came. I seemed to know where I was then. I got myself over to a chair and got up.
“I had an alarm system on my mobile but I couldn’t reach it because it was up high on the mantlepiece. The ambulance came and took me to hospital,” he recalled.
The son of Patrick and Anne Quinn, he was born in Old Mill Street, Ennis, where eight of the children used to sleep in a straw bed, which was stitched up by his mother when mattresses were not available at the time. His sisters slept downstairs in a separate area from his parents and his two year-old young brother, who slept in a small box. At the time there was only one tap on the road.

Having spent two weeks in the Local Defence Forces in Ballincollig, Cork, he earned enough to cover his trip to Kent, England, where he arrived without any wordly possessions in 1952.

He spent some time in the so-called “midway towns” including Gillingham, Kent. His late brother, Patrick got him digs and helped him to get a job rolling expanding metal onto asbestos on his knees to cover piping in a factory hut.
Over his head, asbestos particles were constantly coming down like flakes in a snowstorm, which he was left to exhale without a mask or protective clothing for six months. Workers were advised to drink two pints of milk daily, which was supposed to reduce the amount of coughing.

Having given up working with asbestos, he went to a scrap iron yard where he worked for 29 years until he returned to Ennis in 1976 following the untimely death of his wife, Ann Herbert from Strude, Kent. He subsequently worked with Clare County Council for about 20 years tipping  refuse bins before the advent of wheelie bins.

Following a series of tests including MRI and x-rays at University Hospital Limerick and Ennis Hospital, he was diagnosed with asbestosis three years ago and was just outside the time limit to apply for statutory compensation.
ClareCare transports his to have his meals five days a week in Chapel Lane, Ennis. Anytime he goes outside the door, he must bring his mobile oxygen bottle, which lasts two hours.