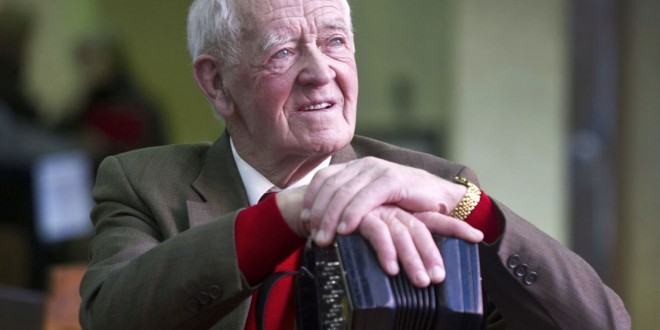 INTERNATIONAL tributes have been paid following the passing of the acclaimed Bellharbour concerntina player, Chris Droney, who passed away on September 9, at the age of 95.

Broadcaster, teacher and musician Kieran Hanrahan, who spoke at Chris’s funeral on Saturday last, said, “He was a chieftain in Clare. Some called him a druid and leader.”

The Ennis man credited Chris Droney with inspiring a blossoming of traditional music in the county town and across Clare.

“When Chris would come to Ennis for the Fleadhs, he was really what I would call a mega figure,” Mr Hanrahan said. “He was a national figure in the ‘60s and ‘70s and yet he was still so accessible. He always had a word of encouragement, especially for the youth of Ennis in those days. He took a delight in young people playing music. He was always so lovely and so decent. As a person, he was unassuming and an absolutely gorgeous character.”

In one of his last recorded interviews, Chris told TG4’s Fleadh 2020 programme of how he started to learn the concertina at the age of eight, after taking the tradition from his father James and grandfather Michael Droney.

Over the years, he was crowned All-Ireland Concertina Champion nine times and played with leading traditional groups, including the Bellharbour, Ballinakill, Aughrim Slopes, Kincora and Kilfenora céilí bands. As well as touring internationally with Comhaltas Ceoilteoirí Éireann, he made three solo recordings: The Flowing Tide (1962), The Fertile Rock (1995) and Down from Bell Harbour (2005).

Among his many accolades were the MÓRglór Award, the TG4 Gradam Saoil Award, the Bardic Award from Comhaltas and a Teastas Award. In 2012, he was named Clare Person of the Year.

Mr Hanrahan recalled that one of his favourite meetings with Chris had been for a programme made for RTÉ in 1998. “I had a beautiful interaction with him when I went up to his house in Bellharbour in 1998 to talk about a programme which Ciarán MacMathúna had recorded there in 1956 with himself, Willie Clancy and Jimmy Ward. At that recording, Chris lilted a tune that Jimmy Ward had performed at the ‘56 recording and it was an absolute thing of beauty. Chris just oozed tradition.”

Describing his concertina style as “rhythmical and ideal for set dancing,” Mr Hanrahan noted that Chris had been a great set dancer himself.

Excerpts from both the 1956 and 1998 recordings will be broadcast on Céilí House on RTÉ Radio One on Saturday, October 3.

“Chris was hugely respected in traditional music circles,” he said. He was born not long after the foundation of the State and his longevity means that he touched many people and handed on the tradition to his own children and grandchildren. While he was an icon for traditional music, he was still very humble and lovely to meet. Really he demonstrated how we should all live our lives because he worked hard and still he knew how to enjoy himself and to have fun. As a farmer in the Burren, he was devoted to it and not afraid to try new things. He had the same attitude to his music. He was a dear friend and I’ll greatly miss him.”

Fiona McGarry joined The Clare Champion as a reporter after a four-year stint as producer of Morning Focus on Clare FM. Prior to that she worked for various radio, print and online titles, including Newstalk, Maximum Media and The Tuam Herald. Fiona’s media career began in her native Mayo when she joined Midwest Radio. She is the maker of a number of radio documentaries, funded by the Broadcasting Authority of Ireland (BAI). She has also availed of the Simon Cumbers Media Fund to report on development issues supported by Irish Aid in Haiti. She won a Justice Media Award for a short radio series on the work of Bedford Row Project, which supports prisoners and families in the Mid-West. Fiona also teaches on the Journalism programmes at NUI Galway. If you have a story and would like to get in touch with Fiona you can email her at fmcgarry@clarechampion.ie or telephone 065 6864146.
Previous Family doctors braced for rush on flu vaccinations
Next Stage set for inaugural Michael Cusack Day in Carron