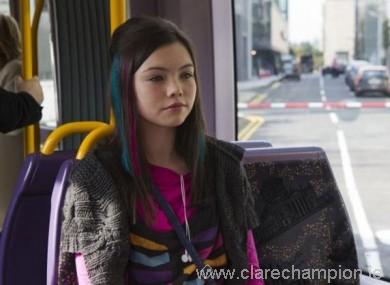 A scene from Amber

LAURYN Canny rose to fame in the recent RTÉ drama Amber but many people in Clare already knew her. Born and reared in Dublin, she spends many holidays with her aunts, uncles and cousins in Corofin and Newmarket-on-Fergus.

Lauryn’s path into acting didn’t bring her through formal training. Hers started instead as many other journeys do.

It is three years since Lauryn landed the titular role in Amber and she has fitted a lot into the intervening period.

“I didn’t really tell that many people coming up to it because I didn’t know when it was going to come out and I don’t want people making a big deal out if it or anything but then the ads started coming on the television and people knew it was me. I just get called Amber, no-one treats me any different and it is just people I don’t know calling me Amber and that is kind of weird but that is it,” she revealed.

Since the four-part series was broadcast, things have changed a lot.

“It has been crazy. I have gotten really positive feedback. I was very nervous. It did well. I was really happy with how it turned out. I really liked it,” she said.

The inconclusive ending of the mini-series caused some controversy in its immediate aftermath.

“I personally really liked it. I think it is completely realistic. It is the truth. Most missing person cases don’t get closure. You don’t get answers so I think [the viewer] could feel something of what the family of a missing person could feel, especially the anger when [viewers] have only put a few hours from our lives into a show and not getting any closure. I think it is ironic but I can see how it would be frustrating for people. I don’t know. I don’t have any answers either so we are all on the same page,” she outlined.

“There was word about her being dead but I don’t like to think that about Amber,” she commented.

Filming Amber took between six and eight weeks and Lauryn was on set for about a month of that. Despite the short time the work took, the experience has stayed with the young actress.

“People who know me or who know my nanny or granddad, they would say hello now but I just get called Amber everywhere I go.”

Most of the filming for Amber took place during the summer, so there was minimal impact on Lauryn’s school work. Having just completed her Junior Certificate mock exams, she knows the value of good attendance.

“I filmed a film last year when I had to take a few weeks out of school and I had to have a tutor come and teach me after filming and at weekends,” she explained.

Lauryn was back on Irish screens at the weekend, albeit the silver screen this time, at the Jameson Irish Film Festival starring in A Thousand Times Goodnight, which goes on general release at the end of the summer. Lauryn stars alongside Danish actor Nikolaj Coster-Waldau (known for his parts in Oblivion with Tom Cruise and Game of Thrones), Oscar-winner Juliette Binoche and Irish singer and film and television actress Maria Doyle Kennedy.

“Everyone was just so nice. I went into it really nervous thinking ‘I’m the child. No-one is going to talk to me’ and they were so lovely and I just learned so much from them – everyone that I worked with. Working with Juliette Binoche, that is just really incredible. It still hasn’t sunk in yet. It was really surreal but I learned so much. I was like a little sponge – watching everything. It was great. Everybody was lovely. I haven’t had a bad experience with anybody so it was just great,” she said.

Lauryn also filmed a short film in October called Arrabella and she expects that to come out this year too.

“I am going to do a lot more auditions over the next weeks and months. I will just keep auditioning and hope for the best and get my Junior Cert,” she said.

Lauryn is a big fan of young Irish actress Saoirse Ronan, describing her as “one of the most talented actors out there”.

“I do want to make a career out of it as much as possible. I would hope I live here in Ireland but I hope to work outside of Ireland as well. I think it would be fun to work in different places but I love Ireland so I will stay here for as long as possible,” she added.