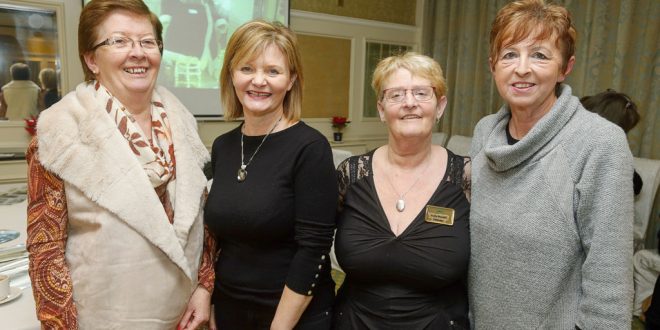 This year’s competition theme was A Vintage Christmas, with a particular emphasis on 1916 and the 100th anniversary of a changing Ireland.

The charity shop in Ennis’ Marketplace wowed the judges with its impressive array of authentic period pieces, including books covered in newsprint from the time.

Anne Gavin, who works in the shop, explained, “All of the staff came together and brought something in from home to decorate the window. It was a big team effort and we all had great craic doing it.”

Co-worker Mary Casey brought in an old book of Irish fireside songs which her father owned, while other items donated for the display include clay pipes, an old fashioned bottle of stout and glass, coins and an old teapot.

The staff say they were thrilled with the win. “We were just in awe over it, I never thought we would get first prize. When I saw the window completed and how great it looked, I had a feeling that we would win something but not first prize. Everybody working here in the shop all put in a bit of input and we’re just delighted with how it turned out,” Mary added.

They paid tribute to shop manager Shirley Benson for her work in bringing it all together. The shop has won €1,000 worth of advertising in The Clare Champion.

“This is the 13th year of the window display competition and every year the entries get stronger and stronger. People did wonderful vintage windows and interpreted the theme in many different ways, helping to bring a bit of additional festive cheer to the town. And we are hoping that this will encourage more people to come into Ennis and shop local,” she said.

Regarding the overall winners, she said the Cahercalla Hospice charity shop stood out due to its attention to detail. “The window had the highest marks across all seven judges. It was really down to the little details, like the books wrapped in newspapers about Michael Collins, which made it so special.”