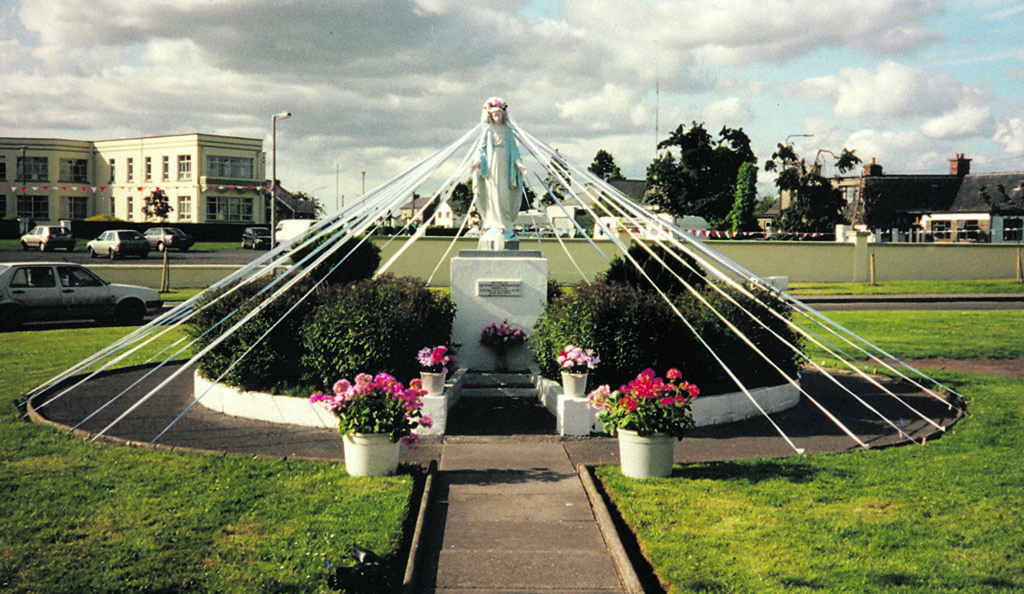 An old photograph of the Marian Avenue grotto

A trip down Marian Avenue

RESIDENTS of Marian Avenue, both past and present, will gather next week for the launch of a new book exploring the history of both the estate and its people.

Next Thursday night at 8.30pm in The Old Ground Hotel, Mayor of Ennis Paul Murphy will launch Marian Avenue 1956-2017 – A Social, Sporting and Photographic History by Ollie Byrnes, in association with Clare Roots Society. The launch will be preceded by a mass of remembrance for deceased residents of the area at the cathedral at 7.30pm.

The book, which took three years to complete, traces the 61 years of growth of Marian Avenue, which was the replacement development, after the demolition of the Old Boreen. While celebrating the past, the book records the wider area of the northern side of Ennis over the Club Bridge.

Using information available publicly and from many interviews, Ollie traces the 130 families associated with the 64 homes in the estate. Marian Avenue is woven into the social fabric of Ennis, being a vibrant, close-knit community.

The book captures the era of the building of numerous statues in remembrance of the Marian Year of 1954, the early rumblings of rock and roll, the suppression of literature and film, to the arrival of the 1960s.

At a council meeting in November 1952, the council proposed the building of 68 houses on the Old Boreen site. It would be another four years before Dermot Solon and Ben Garvey, building contractors, were to commence the construction of 64 houses at the rear of the existing Boreen. The estate was completed in December 1956.

The area is unique, with four public houses within walking distance – Michael Kerin’s established in 1865, Kearney’s Bar and Hotel, established in 1912; James O’Keeffee’s/Tom Steele’s in 1914 and The Copper Jug in 1918. In an interview recorded in June 2012, on his 91st birthday, Josie Kerin told Cuimheamh an Chláir that “those days will never come again”
.
There were three shops in the immediate area, namely Kelly’s Corner, Hynes and Howards.
The book boasts 31 individual contributors. Among them is Brian Dinan, who recalls the most pertinent social question of recent times, when Paddy (Giles) Coughlan asked, “Who deducted the ducks from Ballyallia Lake?”

Tony Mounsey, Tony O’Gorman and Teresa (Ball) Walsh also contribute, along with many others, who recall their early years, growing up in the area. Anthony Woods, a prolific letter-writer to the newspapers, recalls the area as “a place where people know their neighbours”. Michael O’Loughlin, who left the area more than 30 years ago, recalls the area as “a place where everyone was someone worth knowing”. Marian (O’Gorman) Murphy’s memories from the area are one of “a caring neighbourhood”.

The book includes 52 pen-pictures of some of the top hurlers associated with the Boreen, Steele’s Terrace and Marian Avenue, also 29 pen-pictures from the Avenue United Squad of 1990.

Clare Roots Society, in welcoming this new publication, made the point that “the people of an area can lose its memory, if its past is ignored or not preserved.”

According to the society, “Ollie Byrnes, in this new book on Marian Avenue and surrounding areas, has completed the task and, in reading this book, we learn the history of our family, neighbours, and friends.

“The inclusion of over 280 photographs will bring back memories of many of the residents of our town, who have gone to their eternal reward, while the stories paint a picture of growing up in Ennis over the last 60 years.”

Ollie grew up on the corner of Gort Road and Marian Avenue, close to Kelly’s Corner. He has had a life-long interest in history, be it social, political, or sporting. This is his first publication with regard to a social history. It would not have been possible, he said, without the support of old neighbours and friends. He has previously published Clare Hurling Voices 1910-2010, Against The Wind, Blue is the Colour, Around the Square, Between The Green and The River and The Avenue.