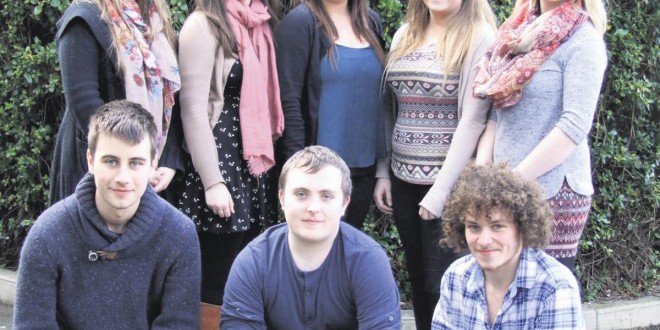 Young local musicians who will perform the Boroimhe Suite.

A special stage for Boroimhe Suite

A SPECIAL 50m stage is being constructed to facilitate the eagerly-anticipated production of a new suite of music, commemorating the life and times of Brian Boru.

Preparations are in full swing to ensure the stage and other additions to St Flannan’s Catholic Church will be finished for the Boroimhe Suite on Wednesday, April 23 at 8.30pm.

It is fitting that Killaloe has the distinction of hosting a performance of this suite in old Kincora, where Brian Boru previously ruled. This is just one of the four April performances of the suite, which kicks off in Clasac, Clontarf on Monday, heads for Armagh Cathedral the following day before making the long trip to the banks of the River Shannon on the High King’s 1,000-year anniversary. On Thursday, the orchestra’s whistle-stop tour ends in Brú Ború, Cashel.

Having augmented the sound of the National Folk Orchestra with the inclusion of a group of highly skilled musicians, composer Michael Rooney believes the resulting sound is “very special”.

Clare boasts one of the largest contingents of the orchestra. Alisha McMahon, O’Callaghan’s Mills and Eimear Coughlan, Tulla join five others to form the harp section of the orchestra, while Aisling Hunt, Tulla Aoibheann Queally, Ennis and Francis Cunningham, Crusheen add power to the reed section.

As part of the Ború celebrations, Comhaltas Ceoltóirí Éireann commissioned composer Michael Rooney to write a suite of music, song and dance.

The orchestra, which includes both traditional and classical styles, boasts leading young musicians from around the country and will be boosted by dancers, singers and actors.

Professional choreographers, with an understanding of both Comhaltas and commercial dance shows, have been engaged, while experienced actors have been selected for the dramatic and narrative pieces.

Tickets are available from retail outlets in Ballina and Killaloe and for further information, see www.coisnahabhna.ie or telephone 086 8035157.