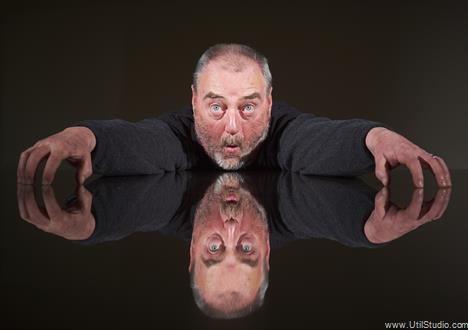 Jon Kenny who is bringing a new play by Katie Holly called Crowman to Glor on Friday April 5th at 8p.m. Photograph by John Kelly.

Jon Kenny takes to the Glór stage next week where he brings a new one man play, Crowman, by rising Irish writer Katie Holly.

First performed as part of the Cork Midsummer Festival in 2018 to nightly standing ovations Jon Kenny, (D’Unbelievables) will bring it to Ennis on Friday April 5.

Crowman is a new darkly comic play, which is littered with surreal and humorous characters, all expertly juggled by Jon, and tinged with tragedy.

Set in a sparsely decorated kitchen, this intimate one-man show, is a window into the soul of a lonely bachelor, Dan. Dan is a man with a mission; to scatter, maim or kill every crow that has blighted his land and his life.

Discussing the central character and the play, Jon outlines how interesting and funny a character Dan is.

“In the course of the piece, we are introduced to Dan and he is living on his own, and we see an awful lot through Dan’s eyes. Quite early in the play he hears about the death of a friend of his from school. What unfolds is that there relationship was special, and special to him, because she in some ways understood him”.

He gets distracted easily by flights of the imagination – memories of events from his past and a weekly schedule of funerals and masses he must attend, along with imagined conversations with his beloved sheepdog, with a stream of racing commentators and TV chefs and with David Attenborough – all so that he can hear a voice that is not his own.

“Dan lives on his own and he is not cut off but he stands back a bit from society and observes and that’s what we get when we meet him first. Our first introduction is he has come back from town, a town like Ennis, and he is full of the news of what went on and the people and the colour. He’s a brilliant observer and he relates the news back to his dog who he calls Pup,” Jon said.

He explained that Pup is his friend and companion but in relaying the news about his friend the audience sees a switch in his character.

“He goes into himself and we see how this relationship between him and this young lady who has passed away brings up other stuff”.

Jon said this play is a bit of a rollercoaster as audiences are roaring laughing one minute and then the next they are taken to a completely different place, nearly in tears before coming out of that again and laughing once more.

“I think Dan’s story is a universal story, of how easy it is to become disconnected from society. It’s very easy to lose people and for people to lose themselves. Dan is someone who is sensitive and shy. There’s a rawness to it and it shows how easy it is to withdraw into yourself”.

He added that even in the era of digital communications the play shows how easy it is to become isolated by society.

“I think it all resonates with me, in some ways there is a lot of me in it, sure there has to be. I can empathise with Dan. The Dan we see on stage is my interpretation of Dan, so you end up putting your own experiences into things when you are doing it. When I’m playing Dan as a kid, it is as much me as a kid as it is Dan” Jon said.

He explained that as well as being a great piece of writing by a young emerging playwright this is a very humorous telling of a story that will resonate with a lot of people.

“There’s humour in it, but you know there is an underlying current to it. It is set in a house in a rural setting, in south Munster in north Cork, and it’s a dialogue that matches that area because that’s where the writer Katie is from. There’s lovely colourful language and turns of phrase which are very authentic,” he concluded.

The play runs for one night only in Glór on April 5 next.

Carol Byrne is a reporter at The Clare Champion newspaper reporting on news in the East Clare area and the arts. She also covers the courts in County Clare and has received seven national awards for this coverage from the Law Society of Ireland and a National Lottery Local Ireland national media award for Best Community Story 2019. A Masters in Journalism graduate of NUI Galway, she also holds a Bachelor of Arts from the University of Limerick in Music and Media Studies, and a Higher Diploma in Irish Legal Studies. She began her career interning at The Limerick Leader and Clare FM, before taking up a full time post at The Clare Champion in 2006.
@@Carlsburn
Previous Free Public Information Evening on Prostate Cancer
Next Public urged to ‘consider care options’ following UHL surge