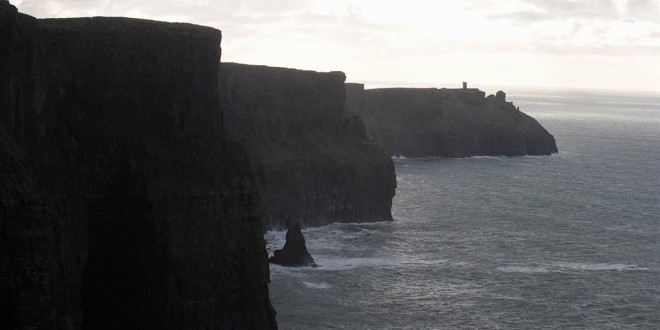 12.5% increase in Cliffs of Moher visitors

Visitor numbers at the Clare County Council owned Cliffs of Moher visitor attraction have increased by 12.5% during 2014 breaking the one million mark for the first time.

Figures released reveal that visitor numbers have hit 1,075,000 for this year, representing an increase of over 115,000 visitors on the overall figure for 2013.

2014 marks the fourth successive year of increased visitor numbers to the Cliffs of Moher Visitor Experience. The visitor centre has also seen substantial investment in product and facilities in 2014 with a spend of over €600,000 on additional coach parking facilities, new exhibition content, restoration works in O’Brien’s Tower and a redesign of the foyer at the visitor centre.

“A number of positive factors combined during 2014 to drive visitor numbers over the one million mark,” Katherine Webster, Director of Cliffs of Moher Visitor Experience.

“New routes and increased access into Shannon Airport, the launch by Failte Ireland of the Wild Atlantic Way on which the Cliffs of Moher are a Signature Discovery point, the popularity of the 12-kilometre Cliffs of Moher Coastal Walk, and the Cliffs of Moher’s close links with Brian Ború during the millennial anniversary of his death have all contributed to the visitor number increase during 2014.