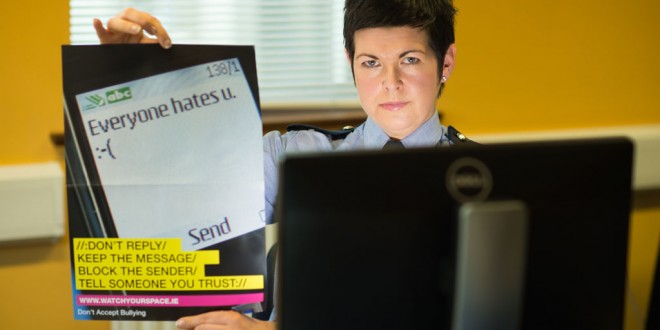 TEN-year-old Clare children are inadvertently engaging in cyberbullying, according to a local community garda.

Garda Deirdre Scanlon, who is based in Ennistymon, has also warned that there are 11 and 12-year-olds with Facebook pages who are befriending people online who they don’t know, without realising they could turn out to be a sex predator.

Having delivered a series of cyberbullying talks to primary and secondary schools over the last two and a half years, she believes the increased availability of different forms of information technology has facilitated more cyberbullying by children and teenagers.

“Children and teenagers put up a comment and they have no idea it is up there forever. It seems every comment has to be worse than the next. It can be a case of bitchiness with the girls, who tend to be worse than fellas. Fellas don’t seem get as involved as much but girls can get involved in groups.

“They all say ‘no’. But yet they have no problem putting all this up on a computer,” she explains.

Her concern about the availability of the internet on mobile phones and laptops is shared by another community garda, Deirdre O’Doherty, who also delivers talks to teenagers in schools.

Based in Ennis, Garda O’Doherty believes teenagers now have a greater understanding about what cyberbullying actually is.

“The reaction from talks is a lot of teenagers aren’t surprised by the amount of cyberbullying. They all know it is going on. They know someone who is involved in cyberbullying or who has been a victim of cyberbullying,” she said.

Garda Scanlon tells primary school children that their friends are the people they sit with at school, play hurling with and socialise with and shouldn’t engage in trying to get as many online ‘friends’ as their classmates.

Outlining what anonymous really means, she explains that primary school children think they are befriending an 11 or 12-year-old from a neighbouring school. However, it is possible this ‘friend’ could turn out to be a sexual predator.

Garda Scanlon delivers the respectful online communication talk in primary schools for fifth and sixth class students who already have a mobile phone for their Confirmation, at the latest.

She believes public awareness and more parental responsibility will help reduce the incidence of cyberbullying.

“There are 11 and 12-year-olds with Facebook pages. They are befriending people who they don’t know. They are warned never to meet a person they connected with on a computer without first telling a parent,” she said.
“I tell children, bedrooms are for one purpose – sleeping. Children are bringing phones into their bedrooms, laptops and InnoTabs with wifi access.”

While most of the schools she has visited have organised parent talks on this subject, she stressed it is vital that parents take responsibility and monitor what their children are viewing on the internet.

During her secondary school Connect with Respect talks, she tries to make students more aware of the dangers of posting personal photographs of themselves.

“Girls tend to be more vulnerable and naive. They can put up photographs of themselves that may be provocative and don’t realise where they can end up.

“I tell them six years down the road, ye will be finished school and be looking for jobs. Employers can Google their names and find out everything about them, whether it is a video of getting sick at the back of a nightclub,” she said.

She tells teenagers if her friend got sick at the back of a nightclub, when she was growing up, she would get a bottle of water and help her. Instead, she says there is a race to be the first girl to take the photograph and the first one to post it on the internet and tag other friends.

If a school suspects a bullying incident, Garda Scanlon is regularly contacted to give a talk to make teenagers aware of the impact of cyberbullying and is getting more calls than she did previously.

“Parents need to come on board and come to parental talks given by schools in the evenings. If this is new to me, it is very new to some parents.”

“Parents need to be able to know what sites their children are going on. A parent has come into me and said their child is being bullied at 3am. They have told me he is getting abusive messages. A child shouldn’t have their phone or computer on at 3am. The laptop or computer should be left in the living area, where there is parental supervision. It is not healthy for any youngster to be on their own on a computer.

“It can be completely unintentional but they can end up on sites they shouldn’t be on. Kids tell me, ‘I was watching something and another site popped up on my screen’,” she said.

She has advised children and teenagers not to reply to abusive messages, to keep the message, block the sender and tell someone they trust, such as a parent.