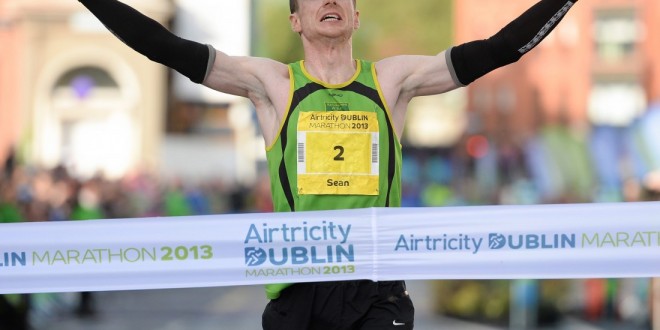 Sean Hehir on his way to winning the men's race in the Airtricity Dublin Marathon in a time of 2:18:19.Picture Stephen McCarthy / SPORTSFILE

AFTER coming a cropper to a cyclist, four miles from home, Clare athlete Sean Hehir was still first to cross the winning line in Monday’s Dublin City Marathon.

The first Irish man to win the race since John Treacy 23 years ago, Sean now has his sights firmly fixed on the European Marathon next year.

“This is the stuff of dreams,” Sean, a member of Rathfarnham AC told The Clare Champion on Tuesday, as he reflected on the biggest win of his career to date.

He paid tribute to Marian Athletic Club in Ennis, where he received his early coaching.
“When I started at 12 or 13, Arthur Ford was my coach. Back then, I never dreamt of a day like this. It was three or four years before I got a sniff of winning. I was fortunate to be with a great group in Marian and also to have very supportive parents,” he said.

Sean is the son of former Clare senior hurler, Sean and former international athlete, Cushla.
“Growing up, we were lucky that Dad was still hurling and was dedicated to training. There were medals around the house and Mam would tell the story behind the medal and that all inspires you,” said the marathon champion, who is a primary school teacher in Scoil Mhuire Gan Small in Inchicore for the past nine years.

Sean nearly didn’t make it across the finishing line on Monday. “Four miles from home, there was a cyclist who was oblivious to the race and he crashed into me and nearly took me out of the race. I managed to get back on my feet and get back into my rhythm. It was a complete accident but, thankfully, I recovered,” he explained.

“Around that time, I had my own mini crisis and my legs and arms were cramping but I managed to get through that and it was great to get to Merrion Square, it was incredible,” said Sean, who is coached by Dick Hooper, a three-time winner of the event.

On Wednesday of last week, Hehir and his coach had sat down to finalise their plans. “We knew the competition. Sergui Ciobanu (he is based in Waterford) had done a 2.15. We knew Joe Sweeney was strong; he was fifth in the European cross-country two years ago. We knew where the competition would lie. Joe hadn’t shown great form recently; he was away in Italy training with Dublin specifically in mind,” he explained.

Sean admitted there was a fear that weather conditions would be stormy. With strong winds, times would take a serious hit, but it was not as bad as was feared.

Recalling the race, Sean said Brian Maher from Kilkenny City Harriers, a regular competitor at races in Clare, was the pacemaker. He brought the field to the 10-mile mark within the qualification time for the European marathon.

“We dropped off the pace in the next three miles. We erred on the side of caution and we probably eased off a little too much,” Sean explained.
At the 13 to 14 mile mark, Sweeney put in a strong effort and kicked on. He opened up a 100m gap. “I felt the race would be won or lost in the last six miles.

“At that point, where my mother and sister were cheering me on, I closed the gap on Joe and I could tell that he was paying the price for his effort between 14 and 18 miles,” the winner added.

The winner of the ladies race, Marie McCambridge, was in the same training group as Sean in UCC.

The Kilkishen man’s next target is to achieve the time for the European championships, which take place in Zurich next summer. “We have a strong panel for this team event and we can make up an Irish team that will be in with a shout of getting a medal,” he believes.

Getting back to his native Kilkishen, where bonfires blazed to welcome him home, Sean noted he attended national school with Clare hurling captain, Pat Donnellan. “I played underage hurling with Pat up to U-16 level.”

He was in Croke Park for both the drawn and replayed All-Ireland finals but on the morning of both games, Sean did a 27-mile run as part of his preparations for last Monday.

“Tommy Scanlan from Ballyea, a housemate, was setting the pace on the bike. I was down home for the East Clare 10k in Kilkishen and Pat started the race and we had a chat.”

“He trained so hard this season but suffered a broken collarbone in a challenge game on Friday, September 13 and I was so disappointed for him,” he concluded.