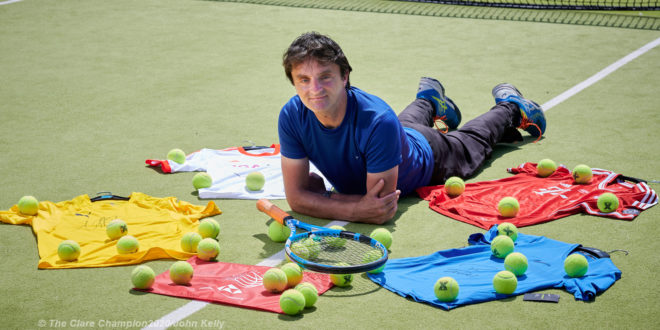 Wesley O Brien, coach at Killaloe Ballina Tennis Club with some of the donated sports memorabilia ahead of a fundraiser that he is organising to buy a defibrillator for Ritsona Refugee Camp In Greece, and to fund forthcoming trips to set up tennis programs In other Greek camps. Photograph by John Kelly.

RAFAEL Nadal is among the international sports stars supporting a Killaloe man to raise funds for a refugee camp in Greece.

Tennis coach Wesley O’Brien is a regular volunteer at the Ritsona Refugee Camp, north of Athens. Two years ago, he started up a programme for residents, thanks to donations of rackets, balls and nets from clubs around the region, including his own in Killaloe-Ballina. As part of a bid to raise funds for a defibrillator for the camp, which is now home to 4000 people, Wesley has secured jerseys signed by some high profile individuals and teams. To-date, these include Nadal, the Munster Rugby Team, Usain Bolt, Rory McIlroy and Franz Beckenbaur. Wesley, who volunteers with Lighthouse Relief, now hopes to be able to sell these rare items in order to generate vital funding support for refugees.

“I had raised funds for a defibrillator for the Killaloe-Ballina Tennis Club, so I decided to do the same again for Ritsona after I returned in January,” Wesley explained. Thanks to a friend with connections to the Spanish Tennis Federation, Wesley got a very welcome, if unexpected, boost to his fund-raising efforts. “I mentioned what I was doing and next thing, I got an email from the Rafa Nadal Foundation,” he said. “I gave them more information about what I was doing and they sent on the signed jersey. Then, Orla Foley put me in touch with Munster Rugby, who were incredibly supportive and sent on their signed jersey too. Another friend has been tweeting all kinds of sports starts and that’s how I secured the other jersey. It’s been just mind-blowing.”

Wesley admits to being something of a novice when it comes to fund-raising and is keen for support and advice on how to make the most of the opportunity. “I thought I could just sell the jerseys on Done Deal, or somewhere, but the plan now is to set up a Facebook page with full details of the project,” he said. “Tennis Ireland has sent an email to all its members clubs and there is sure to be a lot of interest because these are amazingly special items.”

The presence of Covid-19 in the Ritsona camp has made additional support especially welcome and the defibrillator will be going to Greece later this month. “Thanks to the support of these sports stars, I’m going to be able to raise a lot more money than I anticipated,” said Wesley. “It will mean a lot because conditions at Ritsona are very tough for those living there.”

Wesley is now planning to extend his volunteer tennis programme to other camps in Greece and he is encouraging other sports coaches to consider volunteering. “It’s the most amazing and rewarding thing you can do,” he said. “It has changed me as a person. I would encourage anyone who coaches, whether it’s basketball or volleyball or whatever, to get some equipment and go.”

Wesley O’Brien can be contacted at wesleycork@hotmail.com.

Fiona McGarry joined The Clare Champion as a reporter after a four-year stint as producer of Morning Focus on Clare FM. Prior to that she worked for various radio, print and online titles, including Newstalk, Maximum Media and The Tuam Herald. Fiona’s media career began in her native Mayo when she joined Midwest Radio. She is the maker of a number of radio documentaries, funded by the Broadcasting Authority of Ireland (BAI). She has also availed of the Simon Cumbers Media Fund to report on development issues supported by Irish Aid in Haiti. She won a Justice Media Award for a short radio series on the work of Bedford Row Project, which supports prisoners and families in the Mid-West. Fiona also teaches on the Journalism programmes at NUI Galway. If you have a story and would like to get in touch with Fiona you can email her at fmcgarry@clarechampion.ie or telephone 065 6864146.
Previous It’s time to get deal done – Breen
Next McNamara Covid Committee Warned Over Hospital Waiting Lists