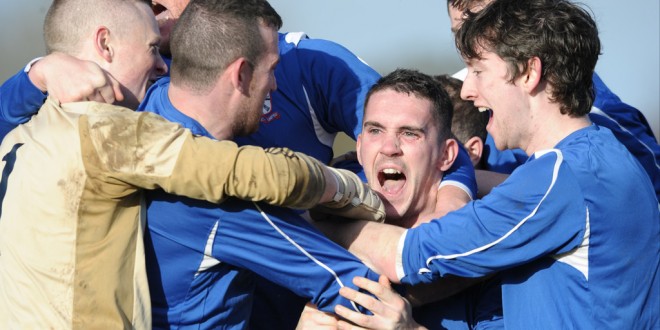 A delighted Jason White of Bridge United is congratulated by team mates after scoring a late equaliser against Newmarket Celtic during their top of the table Premier League clash at Newmarket. Photograph by John Kelly.

White’s strike earns Bridge Utd a share of the spoils

Newmarket Celtic A 2 Bridge United A 2

Full back Jason White earned Bridge United A a share of the spoils in this top of the table premier league clash at McDonagh Park on Sunday morning when he found the net in the first minute of injury time, sparking off great celebrations amongst supporters and officials of the visiting club.

League leaders Newmarket looked to be heading for another win when they went 2-0 ahead with ten minutes remaining when Ronan McCormack scored from the penalty spot after substitute Cathal Hayes was fouled in the area by Bridge goalie John Mulready.

The visitors refused to give up, however, and were thrown a lifeline six minutes from time when Mike McNamara finished after a bout of pressure.

They continued to pile on the pressure and when the league leaders failed to clear from a corner, White pounced for what could yet prove to be a most valuable point.

The home side held a deserving one goal lead at half time after Colin Smith’s effort from a free kick on the edge of the box flew into the bottom corner with the help of a deflection. The free was awarded for a soul on Smith who caused a lot of problems for Bridge United in the opening half.

Referee Martin O’Brien produced ten yellow cards as he held a firm grip on this latest meeting of the neighbouring rivals.

Meanwhile, in the meeting of the bottom two, Lifford eased their relegation worries a little with a 3-1 win over visitors to Cassidy Park, Bridge Celtic. Hamad Kuku, an own goal and a Sean Hayes penalty accounted for the winners goals on a day when the visitors pulled one back late in the tie.