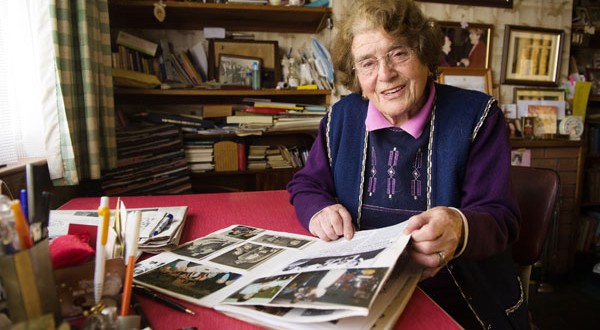 Maureen Cronin at home in Ennis.

When Maureen defied the marriage ban

WELL known Ennis-based writer, Maureen Cronin, wanted to be only one thing as a child – a teacher.

So, it was no surprise to her family when she went on to secure a scholarship, allowing her to attend Our Lady of Mercy College, Carysfort, Blackrock to qualify as a national school teacher.

However, after teaching in many schools after her graduation, falling in love could have meant the end of her time in the classroom. The introduction of the marriage ban in 1933 meant any female teacher who married after the rule came into force, had to give up their permanent job.
That wasn’t to be for Maureen, who defied convention by carrying on working for 12 months without pay, then continuing her career until well after the ban was eventually lifted in 1958.

For many she was a pioneer, but the mother-of-four modestly says she was only able to take this dramatic step because she had the means to provide for herself.
She noted that for many others, they did not have that choice, giving up on the chance of marriage in favour of the job that they loved. She urged the younger generation to reflect on the sacrifices that were made.

When Maureen married Sean Cronin, the Sliabh Luachra native was teaching in County Limerick. She recalled that after her marriage, she went back to the school and continued to work without receiving a salary.

“I went back a week after into the school and I was still Maureen O’Carroll, there was no such person as Maureen Cronin, she didn’t exist. Just because you had a different name, you couldn’t teach. The inspectors came, passed my room and went into the others, I didn’t exist. I had no brother, so my parents left me the farm, I had money, so I stayed on to best this thing out.”

This continued for almost a year until she was eventually dismissed from her post. “They were alerted in Dublin about this, I don’t remember if it was a garda or who it was who came out to me, it was a long time ago. But they said, I’m dismissing you from this moment, if you are here tomorrow you will be removed.”

It was only through the intervention of the then Bishop of Limerick that Maureen received payment for her time at the school.  “The bishop heard about it and he sent for me and my husband. He said, ‘do you mean to tell me you taught for a year without pay’. He said he would go up to Dublin and see what he could do and he came down with my year’s salary under his arm.”

While the marriage ban barred her from holding a permanent position, Maureen was, however, able to be a temporary teacher. She worked in many schools before seeing an advertisement for a position at the Colliery School near Castlecomer, County Kilkenny. The school was run by Captain Wandesford, who Maureen describes as “a wonderful man”.

“He put the ad in the paper and he said they would take any religion as long as they could do music, because Protestants are very interested in music for their services. For the gas of it, didn’t I answer the ad and didn’t he agree to take me on. The job came with a beautiful residence, everything. I went up with my then three children and my car and my trailer.

“Captain Wandesford couldn’t do enough for us; he said what colour would you like in your room? If you feel like going to Dublin for the day, leave the assistant to carry on. I was amazed, they were so kind to me. I would play the organ and teach the children the hymns for the funerals or whatever.”

Maureen and her children headed home every weekend to the farm, which her husband, Sean, continued to run. They were often accompanied back to Kilkenny by members of her family, who all supported the move, including her mother and aunt.

She said her family were made very welcome by both the Catholic and Protestant communities in the area. In fact, when she left the school, she was presented with a model of the grotto at Lourdes.

“I had the most beautiful time, it was the experience of my life,” she said.

She recalled one feast of the Thanksgiving, in which harvest fruits and vegetables were displayed in celebration by the local Protestant community.
“I said to the clerk, what will ye do with all those things. He said, ‘wait and see’. The next day, they were all at my door, everything.”
While much of her life in Kilkenny was a happy time, she did encounter some negativity. “I remember once, when I was passing out with my troupe of children, the local Catholic priest gave me a tip on the shoulder. He said to me, if you get sick in that residence, that beautiful house, and you die, I cannot attend you.”
Maureen stayed in Kilkenny for a year. “They didn’t want me to leave, they wanted me to stay and my husband could drive the estate car. But I had my farm, so I had to go home.”

After the lifting of the marriage ban, she applied for a job near her homeplace at Rockchapel National School  in Cork, where she taught until her retirement.
No longer in the classroom, Maureen writes voraciously, putting pen to paper every day whether it be a short verse or a story. She is well known to readers of The Clare Champion, with her poetry regularly featuring in the newspaper’s letters pages. Maureen has published eight books of poetry, giving that proceeds to charity, particularly Cahercalla, which is very special to her.

“I am writing verses all the time, since I was in national school. Of course, at that time they would have sent you to the corner because they’d call it scribbling. Years ago, I would write and I’d never put my name to anything and now I see them popping up in magazines with ‘Anon’ written on them and I know their mine. Now you have to put your name to everything and be responsible to it.

“When I publish the books, I go around to Cork, Galway and other places to deliver them myself because if I had to pay a distributor, I wouldn’t have enough money for the charities,” she concluded.

Maureen proves age is no barrier