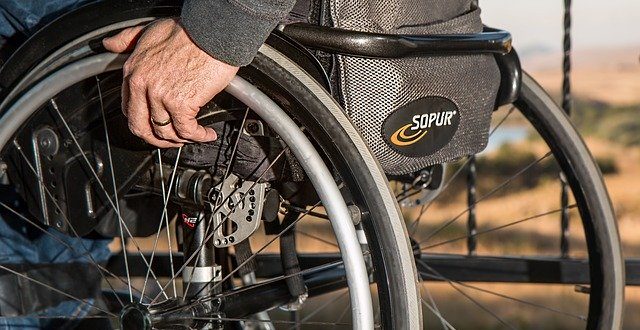 A SOUTH Galway wheelchair user has voiced his concern about the accessibility of vehicles on Local Link routes currently, and called on Minister Shane Ross to “cop on” and return the service to Clare Bus.

Séamus Ó Donnacha from Kinvara, who works for Clare Crusaders in Barefield, has been using a wheelchair for 15 years, said the nature of the accessible buses currently on the routes removed independence from passengers with disabilities, and literally left them “stuck at the back of the bus”. “To my knowledge, there are some accessible buses in the fleet which are able to cater for wheelchair users,” Mr Ó Donnacha outlined. “Clare Bus had low-floor buses which meant that someone could get straight onto the bus. Now, what we have are vehicles with tail lifts at the back. That means that wheelchair user needs to be helped on board, and they’re left there away from everyone else and can’t interact with others. That’s an upsetting situation.”

Mr Ó Donnacha also raised concerns about the requirement for wheelchair users to make a booking  for Local Link Limerick Clare the day before travelling. “I am lucky because I have a car, but if it was being serviced and I needed to get from Kinvara to Gort at short notice, as a wheelchair user, I wouldn’t be able to use Local Link to do that,” he explained. “My worry is that the loss of Clare Bus, which was full accessible, at short notice, will leave people with disabilities, literally, on the side of the road.”

While political efforts to persuade the National Transport Authority (NTA) to reconsider its decision to remove the local transport contracts from Clare Bus, are continuing, Mr Ó Donnacha said it appeared TDs were hitting “a brick wall”. “The NTA need a wake up call in my opinion,” he said. “The idea of accessible transport has gone back ten years. Clare Bus was a fantastic service and they simply couldn’t do enough to support people. Minister Shane Ross needs to cop on and realise that we have lost a resource that was doing an incredible job and should have been allowed to keep doing it.”

Shannon man Pádraic Hayes, who was a regular user of Clare Bus, to access the Dulick Centre in Ennis said the issue of advance booking is also a concern for him. “All the Clare Bus fleet was accessible so you don’t have to get in touch the day before travelling,” he said. “The layout of the Clare Bus vehicles meant it was a universal service, for everyone. In this day and age, it is a shame that something that was working so well should be taken away. I really hope we are not going to go backwards in terms of accessible services.”

In Dáil Éireann, in her maiden speech last week, Sinn Féin TD Violet-Anne Wynne was among three Clare deputies to raise the matter with Minster Shane Ross. “Some 72% of services currently provided by the private operator are not accessible and therefore exclude wheelchair users and those with reduced mobility,” she said. “This is a distressing state in which to leave persons of need.

At the time of going to print, a query to the NTA over the accessibility of vehicles serving the twelve Local Link routes in Clare had not been responded to.

Fiona McGarry joined The Clare Champion as a reporter after a four-year stint as producer of Morning Focus on Clare FM. Prior to that she worked for various radio, print and online titles, including Newstalk, Maximum Media and The Tuam Herald. Fiona’s media career began in her native Mayo when she joined Midwest Radio. She is the maker of a number of radio documentaries, funded by the Broadcasting Authority of Ireland (BAI). She has also availed of the Simon Cumbers Media Fund to report on development issues supported by Irish Aid in Haiti. She won a Justice Media Award for a short radio series on the work of Bedford Row Project, which supports prisoners and families in the Mid-West. Fiona also teaches on the Journalism programmes at NUI Galway. If you have a story and would like to get in touch with Fiona you can email her at fmcgarry@clarechampion.ie or telephone 065 6864146.
Previous Confirmed Cases Of Covid-19 In Clare Rises To 321
Next 12 O’Clocks Hills reopen popular walking trails