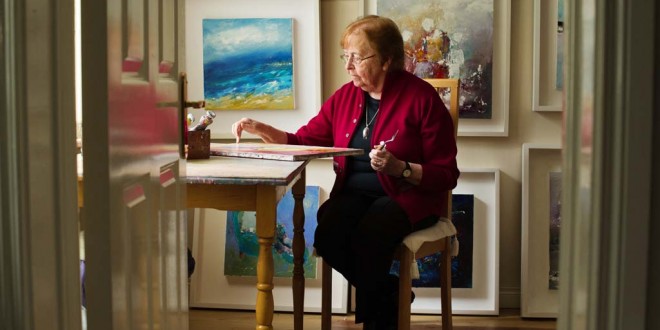 Artist Dympna Bonfield preparing for her forthcoming exhibition "Soul Space" which will run in Glor, Ennis as part of Culture night. Photograph by John Kelly.

SOUL Space, an exhibition by Ennis-based artist Dympna Bonfield is going on show at Glór on Saturday, September 7 and will be there until October 26.
Dympna was born and raised in West Clare but was away for many years before returning to her native county. Much of her work has reflected this move and it is the people and landscape of West Clare that largely inspired her paintings.
She began her career as a primary school teacher but later attended the National College of Art in Dublin and qualified as an art teacher. This led to teaching art in secondary schools and much of her early work during this time took the form of murals painted in some of the places she worked and can still be seen today.
Whilst teaching in the capital, she began exhibiting work in a couple of Dublin galleries and as her reputation grew, she began to exhibit further afield. Her work has now been exhibited in galleries both nationally and internationally.
She said when she begins a painting, she doesn’t have much idea of what the final product should look like.
“When I start to paint, I have a canvas in front of me and I just mess around with my hands and a pallet knife. Sometimes the painting might have three or four lives before it eventually merges. I have no preconceived ideas of what I’m going to do and that’s why the title for the exhibition is Soul Space.”
Most of the paintings in the front room of her home are rather abstract but some are based on quite recognisable sights.
“Some of them are fairly realistic, if you look at them. Some of them are quite naturalistic but they are somewhat abstract – whatever comes out.”
She said she often goes back over paintings and it’s a habit that once cost her, although she’s well able to laugh about it.
“I’ve had many exhibitions over the years, here in Ireland, in France, a lot of my paintings have gone all over the place. I’ve a website and I got an email from some island off South America for a certain painting I’d done. I was excited, delighted, thought I’d be internationally famous but I couldn’t find it. I’d already painted over it and it had a €4,000 tag. That’s life.”
She is qualified in art psychotherapy and spends quite a bit of time on that too.
“I trained in university in London, then I came back to Ireland and I set up my own place in Dublin and worked from Dublin for many years. Because I’m originally from Clare, the draw was there and I upped sticks and came down here. I’m working in the day hospital in Kilrush now with the health board. I work two or three days a week and paint the other days.”
Art therapy allows people to explore issues in a somewhat different way than traditional talk therapy.
“It’s working through imagery. Images are the language of the unconscious, so you’re trying to get in touch with the unconscious through images and chatting about it, trying to ask the right questions,” she explained.