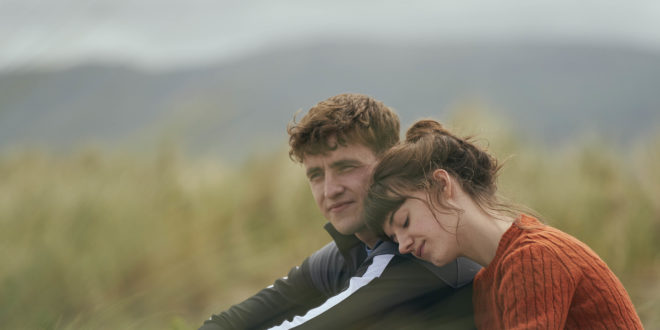 TO SAY that actor Paul Mescal has been “slightly busy” lately would be something of an understatement.

While he may be under lock-down with his fellow Londoners at the moment, and a long way from Cree, where his father’s family hail from, this week has seen him basking in the glow of critical and popular acclaim for his lead role in the TV adaptation of novel ‘Normal People’. Playing the part of Connell, opposite Daisy Edgar-Jones as Marianne, Paul portrays a young man struggling with the highs and lows of first love, against a background of social snobbery, peer pressure and the transition to adult life. His powerful performance has earned the twenty-four year-old plaudits from heavy weight critics nationally and internationally, and tipped the Maynooth native for greater things.

Paul told The Champion that the last 48 hours have been “absolutely mad”. “It’s been a bit bananas,” he said, of the buzz around the first episodes in the 12-part series. “It was shot a while ago and it’s hard to be objective, but I’m incredibly proud of that the response from critics and general audiences has been so good.”

Working with the likes of Booker-nominated author Sally Rooney, acclaimed TV writer Alice Birch and Oscar-nominee Lenny Abrahamson, is no small feat for someone making their television debut. That’s especially true when you consider that Paul didn’t always have an acting career in mind. He is the son of Cree native Paul Mescal (Snr), the son of Mairéad and the late Michael of Dromelihy, and credits the Clare link for his love of drama.

His grand-father was well known in drama circles locally and produced John B Keane’s ‘Sive’ in Cree in the late 1970s. Paul’s dad played the role of Carthalawn.

Paul also saw his dad on stage in his own native Maynooth, but didn’t consider a future in drama until he took the lead role, at the age of 16, in a school production of ‘The Phantom of the Opera’. The experience inspired him to take a degree with the Lir National Academy of Dramatic Art. After that, he was immediately hired by The Gate Theatre in Dublin, where he was cast in some of the country’s biggest theatrical productions.

Paul’s leap into screen acting has been overseen by leading director Lenny Abrahamson, and working with him is something Paul described as “a professional and personal highlight”. “They say you should never meet your hero, but that’s a myth,” he said. “Lenny is incredibly talented and an absolute gentleman too.”

The portrayal of intimate emotional and physical encounters between the characters of Connell and Marianne have blown audiences and critics away, and Paul puts their power down to the director’s approach: “Lenny has a way of removing the camera from the scene. His style is intimate, quiet and gentle, so as an actor, you never feel you’re pushing things.”

Meeting Sally Rooney was another high point for Paul, and the author is fast emerging as the voice of a generation. “She’s at the top of her game and she’s still in her twenties,” he pointed out. “She just takes it all in her stride, but when you sit down with her, you know you’re in the presence of greatness.”

Having moved to London shortly before the Covid-19 restrictions kicked in, Paul is acclimatising in something of a bubble. “It’s an odd way to adjust,” he said. “I’m doing lots of media interviews so that keeps my busy. For an actor in lock-down, it’s about staying match fit I suppose.”

Future prospects for Paul are sure to include all kinds of offers and he is clear on one thing. “My aim is to keep working on productions of this standard. When you have writing from Sally Rooney and Alice Birch, you can’t go wrong.”

Fiona McGarry joined The Clare Champion as a reporter after a four-year stint as producer of Morning Focus on Clare FM. Prior to that she worked for various radio, print and online titles, including Newstalk, Maximum Media and The Tuam Herald. Fiona’s media career began in her native Mayo when she joined Midwest Radio. She is the maker of a number of radio documentaries, funded by the Broadcasting Authority of Ireland (BAI). She has also availed of the Simon Cumbers Media Fund to report on development issues supported by Irish Aid in Haiti. She won a Justice Media Award for a short radio series on the work of Bedford Row Project, which supports prisoners and families in the Mid-West. Fiona also teaches on the Journalism programmes at NUI Galway. If you have a story and would like to get in touch with Fiona you can email her at fmcgarry@clarechampion.ie or telephone 065 6864146.
Previous Laura Brennan documentary wins gold in New York
Next Clare Sports Partnership Walk To Jog 3K Challenge Building Momentum