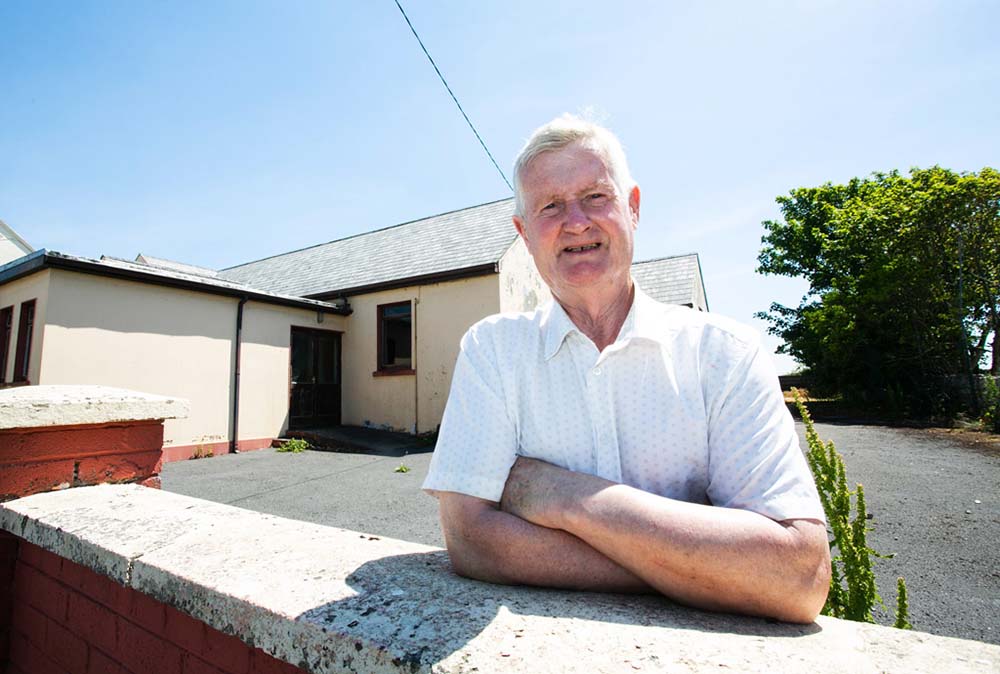 Tommy Comerford at the old schoolhouse in Doonbeg.Pic Arthur Ellis.

DISTURBING new figures have revealed that the projected number of enrolments in seven West Clare schools, in just three years’ time, will just be sufficient to fill a single classroom.

Additional statistics also found that there is significant decline in full time residents living in Doonbeg village, with only 41% of houses occupied permanently.

According to information obtained by the Clare Champion, the combined influx of Junior Infants in the three most westerly parishes on the Loop Head Peninsula, Kilkee, Carrigaholt and Cross, will be just above 30 pupils in 2021.

Co-parish priest of Kilkee, Cross, Carrigaholt and Doonbeg, Fr Gerry Kenny warns that more national school amalgamations will have to be considered in the peninsula, unless there is a dramatic increase in population.

Fr Kenny expressed grave concern about the generation gap, pointing to the lack of young people in their 20s and 30s, settling down to live in West Clare.

“While urbanisation will always be a factor, current rural depopulation trends are extremely worrying. Apart from the construction of the Trump International Golf Club, there has been no major new investment in West Clare in more than 20 years. People living in West Clare have to travel long distances to work in Ennis and Shannon.

“I know a young teacher who got a job in West Clare but she moved out of the area because there weren’t enough of her peers living in the locality,” Fr Kenny pointed out.

Official records compiled by the Kilkee Parish office has confirmed there were a total of 45 weddings in the parish between 2010 and 2017. However, only 18 couples took up residence in the West Clare area.

Baptismal figures for 2010 to 2017 also make for concerning reading for those who are campaigning to attract more people to live in West Clare.

Over this eight-year period, there were 45 baptisms in Cross, 53 in Carrigaholt, 232 in Kilkee and 146 in Doonbeg.

It also has to be noted an average of 40% of the baptisms in the Kilkee parish are of non-permanent residents, given the nature of the high influx of visitors and summer residents in the parish.

“The quality of life in West Clare is superb and it is a great place to live. Communities are very closely knit and there is a great community spirit. West Clare has a huge amount to offer but it needs more support from the state,” Fr Kenny said.

Contrary to the public perception that Doonbeg village is doing exceptionally well as a result of its proximity to the nearby Trump International Golf Club, community activist Tommy Comerford outlined figures for the number of houses with full time residents.

Out of a total of 167 houses within the speed limit area, Tommy estimates only 70 are occupied with full time residents, there are about 54 holiday homes, 14 are unoccupied and a large number are used as weekend residences.

While Tommy acknowledges Trump International Golf Club is a big boost for the Long Village, he says it benefits the entire West Clare region and not just the village.

In fact, he points out some employees are travelling from Ennis and Corofin to work in the internationally renowned golf club.

“The main concern is the lack of young families and full time residents in the village. There are only ten or 11 children between the age of four and 12 from the village attending Doonbeg National School,” he said.