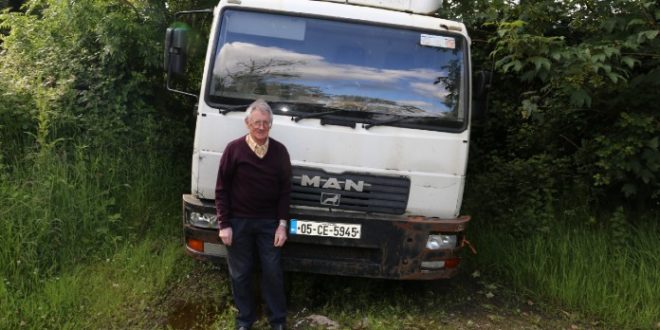 IF YOU asked patrons in your local pub in East Clare whether they sold cattle in the mart that day, they might not tell you how much they got. One thing is for certain, though, if they were asked who brought the cattle to the mart and if they said, “TJ brought them,” you would all know instantly who they were talking about.

Recently, however, Scarriff native TJ O’Callaghan, one of the most famous men at the mart down through the years, retired after almost 50 years in business. Over around half a century, he was well know as a cattle haulier all over Clare, Galway, Limerick and North Tipperary.

TJ said that he encountered many close shaves in terms of dangerous situations. In particular in Ennis last year, he was chased and almost attacked by an animal who jumped out of his trailer. Thankfully, TJ made a miraculous escape. By comparison, TJ said that horses were very quiet and safe to transport.

Down through the years, TJ has hauled calves, cows, bulls, bullocks, sheep, horses and even pigs for his clients all across the Midwest.

Of all the animals he encountered, he said the Limousin cattle were the ones he feared the most. While he wasn’t afraid of cattle generally, he said that it was important to be on guard at all times.

TJ only suffered one minor injury in all the years he was working with livestock when he had a run-in with a dangerous cow. On that occasion, he only slightly hurt his shoulder.

Journeys to the meat factories in Rathkeale in Limerick and Nenagh were a weekly chore for the Scarriff man as well as his weekly pilgrimage to Clare Marts in Ennis.

Marts in Gort, Scarriff, Sixmilebridge and Portnumna were also on his route.

TJ is wished every health and happiness in his retirement.

Fiona McGarry joined The Clare Champion as a reporter after a four-year stint as producer of Morning Focus on Clare FM. Prior to that she worked for various radio, print and online titles, including Newstalk, Maximum Media and The Tuam Herald. Fiona’s media career began in her native Mayo when she joined Midwest Radio. She is the maker of a number of radio documentaries, funded by the Broadcasting Authority of Ireland (BAI). She has also availed of the Simon Cumbers Media Fund to report on development issues supported by Irish Aid in Haiti. She won a Justice Media Award for a short radio series on the work of Bedford Row Project, which supports prisoners and families in the Mid-West. Fiona also teaches on the Journalism programmes at NUI Galway. If you have a story and would like to get in touch with Fiona you can email her at fmcgarry@clarechampion.ie or telephone 065 6864146.
Previous Publicans plea for chance to prove they can open responsibly
Next Ennis at the heart of live-streaming revolution