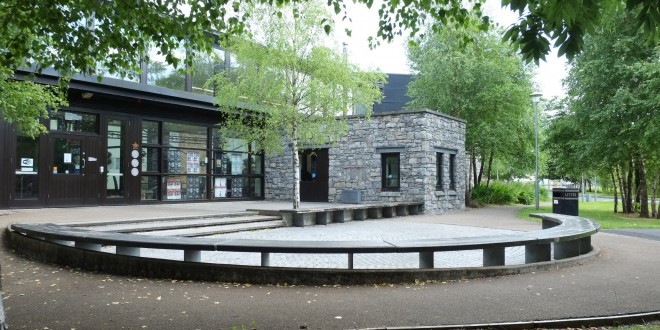 JUST outside Ennis on a dark and stormy night three 30-somethings,Barry, Cusack and Pa, gather again for the anniversary of their childhood friend Liam, who was killed in a road accident when they were 17.

This is the premise for Clarecastle playwright John O’Donovan’s Flights and one of its major themes is the ongoing impact of the recession on men in their 30s.

Like thousands of others, John left Ireland in 2009, with his hopes of teaching here ruined by
the crippled economy.

Speaking about Flights, he says, “They get together every year on the anniversary of their friend, who died when they were 17. He’s been 17 years dead this year, so it’s at that weird point when someone you know is dead as long as they were alive. They’re in their mid-30s and it’s usually a bigger party but as people have moved away and drifted away, it’s gotten very small. They have their own issues as well. One is the father of a newborn, one is moving away that weekend and one guy is unemployed. He’s just been evicted and he’s not sure where he’s going to be going. You get the sense of them splitting apart as well.

“It’s about grief but it’s also about what it’s like living left behind in the West of Ireland.”

There are monologues from their late friend, going back to 2002, when life stretched out before them and young people in a booming Ireland saw boundless possibilities.

“We see his last night, as well as this night. We go back to 2002. I was kind of writing about the difference between being a teenager in the Celtic Tiger, when you thought the world was your oyster and everyone was telling you that you could do anything and then what it was like after the recession. Those are the two things that are contrasting with each other.”

John emigrated to London after being unemployed for a year here and he was left feeling “isolated, angry and completely let down” as young people were faced with a broken economy and virtually no chance of getting any work in their own country.

The trio in the play also have similar feelings of exclusion and he wanted to show how the recession wreaked havoc on the lives of men of his own age.

“It’s kind of the point of the play. The trauma of losing a friend at a young age shapes their life but the second trauma of the recession has shaped it just as much. A personal tragedy and a public tragedy; they would be the terms that I would think of it in.”

Having left Ireland a decade ago solely because of the economic catastrophe, he is still very angry about what has happened and how hundreds of thousands of young lives were thrown into chaos.

“I don’t think our generation should ever forgive what the austerity programme did to the country.”

His characters are not having the type of future that they were expecting back in 2002 and he says that when people act in self-destructive ways, it is important not to forget the circumstances they face in life.

“I think it’s really important when we talk about how men express themselves, or the friendships they have with one another, to remember that there’s an economic system underneath it; it’s not just men being quiet or drinking.

“It’s not just personal failings that lead to these tragedies that people go through, there’s an economic basis for how these things take place; why we drink the way we do at the weekends, why we take drugs, why maybe we end up killing ourselves.”

He insists that the impact of the recession is continuing to reverberate through the lives of many thousands of people, while he feels few lessons have been learned, in a political sense. “For a lot of people, the recession is a distant memory now. But I think some of us are still living with the things that changed our lives. People who don’t see their grandchildren in Australia or the people who died, who killed themselves. Some people are making out that it’s easy to come back now but I don’t think it is; there’s no housing. The same politics of blaming the poor and
blaming the working class continues.”

In London, he isn’t forgetting what a disastrous economic and political failure felt like. “I don’t think we should ever forget what that did. I think our generation will never forget, even if older generations forget and younger generations don’t know. We’ll never forget that we didn’t get to live in our country during our 20s.”

A large part of the direction the play took came about from an evening spent with two other emigrants of his own age, after a mutual friend passed away.

“Three of us who are living over here, who knew him, really felt that need to get together because we wouldn’t be going home for the funeral. We got together that night. At first we were saying will we send flowers or trying to find out what the family wanted, those pragmatic things you do. We stayed out all night and we weren’t just talking about him, we talked about all sorts of stuff. We hadn’t hung out in a while and it took that to get us together.

“That event made me think about all those other lads that I’ve known that have died, those nights that we got together, what that dynamic is. Putting that personal tragedy together with the public tragedy of the economics of it opened out the play for mewhen I was writing it.”

Living in one of the world’s great cities for the last 10 years, he is still drawn to Clare when he writes. “I’ve always liked the way that we talk and chat, the use of subtext that we have and way we slag each other. The people that are closest to my heart are from there, the places closest to my heart are there. It’s easiest for me to imagine stuff that happens there.”

While the play deals with the alienation and misery of those who were hit hard by the dramatic end of the Celtic Tiger boom, John insists there is plenty of humour in Flights.

“I’m making it sound very serious. It’s funny as well in the way that three lads chatting and bantering and sort of taking the piss out of each other is. There’s lots of comedy in it but what’s important to me is trying to get to the
heart of what it’s like being part of this specific generation and to make sense of why our lives are the way they are.”

The play can be seen in Ennis in the new year, from January 15 to 17 at glór.

Owen Ryan has been a journalist with the Clare Champion since 2007, having previously worked for a number of other regional titles in Limerick, Galway and Cork.
Previous Clare GAA Delegates To Discuss Motion To Sell Clareabbey Site In Favour Of Caherlohan Move
Next 100 new jobs for Shannon