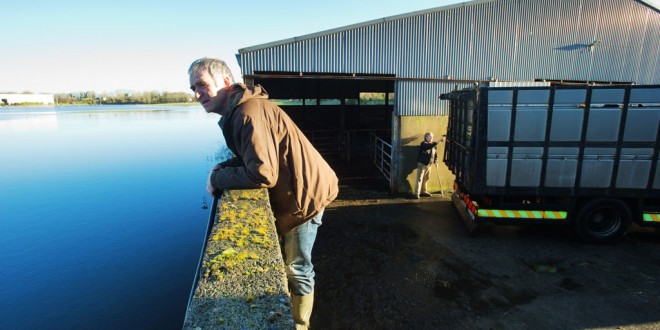 John Nolan watches the flooding as it rises over his farm at Corker, Kiltartan. In the background, haulier Michael Lynskey locks up John’s cattle in a truck for evacuation from the slatted house before the water comes in. Photograph John Kelly

FARMERS are calling on the OPW and Galway County Council to clear drainage channels leading from Kiltartan to the sea at Kinvara, as high water levels have left hundreds of acres of land flooded.

According to Councillor Gerry Finnerty, “There are a number of houses and a number of farm sheds under threat”.
“In the Tarmon, Cahermore, Ballylee, Peterswell, Ballinastague and Coole areas, there is very, very high ground water levels,” he explained.

“Anywhere the small schemes have been done, like in Shanaglish, and with the clearing of the river in Gort, things have improved. They are very small schemes but they have been very effective. When you see the bigger picture though, when the water is going down from Gort to Kiltartan, acres and acres of land has been flooded in Kiltartan and Cahermore. The water is blocking the road at Cahermore and Ballinastague and that is only three miles as the crow flies from the sea. People believe a channel from the area to the sea is what is needed and they are the ones on the ground. Common sense would suggest that is what should be done,” Councillor Finnerty added.

One farmer forced to move his animals for fear of further flooding is John Nolan. He spent Tuesday morning loading 24 cattle onto a truck to move them from his shed in Corker, Kiltartan because water is encroaching. His memories of 2009 make him cautious.

“I have been watching the water for the past while. It rose two feet in one week and now it is just six inches from coming into the shed. The road here is closed because of flooding. I can get the animals out now but if I wait until the day after tomorrow, you wouldn’t know how things would be. In 2009 the water rose by two feet in less than 24 hours,” Mr Nolan recalled.

“At the moment, overall, I would say half the farm is under water, so that is about 60 acres. Most of the cattle are inside now but this means they will be late going to grass. Normally, you would get them back out around the middle or end of March but now it will be well into April or even May,” he said.

This will have a financial impact.   “This means you are feeding them for longer. You would have budgeted for feed but if there is a month added on, it is a different story,” Mr Nolan said.

“Things haven’t been too bad since 2009 but the flooding is beginning to hit 2009 levels now. There have been some improvements and they help certain local areas but they are just moving the water on to become a problem for someone else. The issue should be tackled at Kinvara and work backwards so that the water is flowing freely to the sea. There is no point in just pushing the problem on. There is a culvert under the road and it is great but it allows the water to flow faster down into my land. There are more obstacles blocking the flow of the water between here and Kinvara and there doesn’t seem to be anything being done about these,” Mr Nolan said.

“Right beside us there are plans to build the Gort to Tuam motorway and no one knows what the consequences of that will be,” he added.

Local Irish Farmers’ Association representative, Pat Murphy, says many farmers in South Galway are in a similar position to John Nolan.
“There is a problem in South Galway but it can be solved if a channel is implemented from Kiltartan to the sea at Kinvara and it is doable. The natural channels would manage if they were cleaned out. There are lots of little thing that are blocking it all the way along. Without these things, the water could move freely to the sea,” Mr Murphy stated.

He echoes John Nolan’s praise for the drainage work that has already taken place in the area, particularly the culverts that mean a majority of roads are passable, even when there is flooding on the land either side of them. But this work on higher ground has meant that “John is now in the firing line, because work hasn’t taken place between his land and the sea. Clearing the streams and rivers above him means that water is now coming faster into his land but there is nowhere for it to go and John is bearing the brunt of it now”.

Mr Murphy wants to see the natural drainage channel reinstated to allow water to flow freely to the sea. “The OPW is the lead agency with responsibility for flooding and the buck stops with them basically. You need the political will too, to get something like this done. We are being told that the work here doesn’t pass a cost-benefit analysis but how do you cost-benefit human suffering,” he concluded.