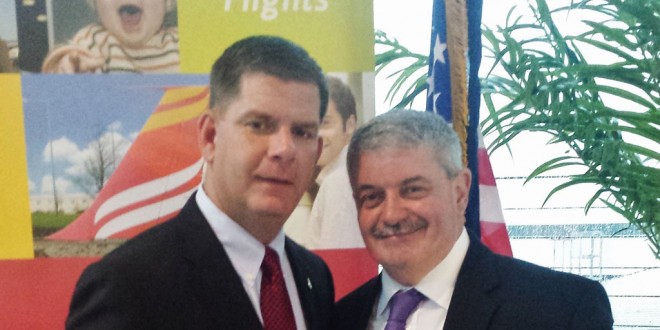 Warm welcome for Mayor of Boston

Ties between the West of Ireland and the Boston area deepened this Friday as the newly elected Mayor of the most Irish city in the US, Marty Walsh, began his Irish homecoming’ with a business breakfast at Shannon Airport.

Hosted by the Shannon Group plc, the event was attended by over 125 people drawn from the business community, among them representatives of leading US multi-nationals with operations across the West and South of Ireland, cathaoirligh and mayors from several counties, as well as members of Mayor Walsh’s extended family, including his mother Mary, and friends from Connemara.

Welcoming Mayor Walsh to Shannon Airport, Group Chairman Rose Hynes said that his visit – his first international trip since being sworn in last January – will only serve to strengthen links between the Boston/Massachusetts region and the West of Ireland . The importance of these links is signified by the presence in Shannon of the first citizens of so many counties and cities in Ireland. They are here to represent the people of these counties and cities, all of which have strong connections
with the Boston area.

“Mayor Walsh’s election as the first Irish American Mayor of Boston in 20 years is a great honour for all Irish people and in particular for the West of Ireland.Just six decades after his father John and mother Mary emigrated from Carna and Ros Muc respectively, he climbed, to the highest office in the most Irish of US cities,” the Shannon Group chairman said.

Ms Hynes said that the significance placed by Mayor Walsh on business and economic relations with Ireland was illustrated last February when a Shannon Group delegation was the first he received as mayor from outside the US.

“Mayor Walsh made a commitment to us on that visit that he would return to Ireland later this year and we are honoured that he chose Shannon, an airport he flew through many times in the past on his way to and from holiday in Connemara.

Speaking at the breakfast event, Mayor Walsh said that while it is a special time for him to be returning to the West of Ireland for the first time as Mayor of the City of Boston, the visit will be much more about work than play.

Call for Council to take seat on Shannon’s board