Home » Arts & Culture » Warm glow to the Bridge below the town 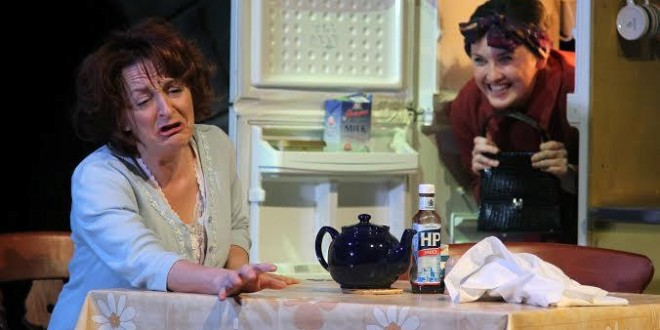 Warm glow to the Bridge below the town

THE 1950s has been getting bad reviews for a long time in Ireland but a play by Patrick McCabe, to show in the Lime Tree Theatre and Glór, looks on the decade with a little more warmth.

The Bridge Below The Town is directed by Padraic McIntyre, and he says that some of the more cheerful aspects of life in the far-off 50s are dealt with. “McCabe feels that it’s a time that gets bad press and he wanted to celebrate that joy in small town Ireland where people talked and communicated with each other and there was that sense of characters in the town, that has probably gone now. Whether it’s because of the internet or Facebook people seem to communicate in a different way and he wanted to celebrate that world where people talked or met and had time for each other.”

It takes the perspective of a woman looking back on her earlier life and some of its seminal moments.
That character is Golly Murray, whose real name is Geraldine, but after having a breakdown she believes that people have given her this nickname.
While she has had her problems, she has now reached a state of contentment with things. “If anything it’s a love story about how her and her husband, through just dealing with things, have come to a very happy place in their lives. She’s looking back on it, but she remembers a time when things were traumatic for her. They did lose a child and at the end of the play we come to a realisation that two people living and working through things together can get over anything. I suppose for Pat McCabe, who is usually quite dark, there’s a realisation that true love and two people working together can conquer everything.”

McCabe is very associated with quite dark fiction, but this is a little different. “For McCabe there’s a resolution to it that I haven’t seen in his other work, where at the end we realise that these two people come through things. She gets up in the middle of the night looking for her tablets and she can’t find them and she relives the traumatic times. But it’s hilariously funny and there’s just a big massive soundscape that McCabe is brilliant at.”

The play is going all over the country and, while it is adapted from a novel, Padraic feels it is something that works well for the stage. “We did a version of it in Virginia where Living Dread is based last year and it was a big success so then we decided to bring it on a bit tour. It’s loosely based on McCabe’s second last novel which is The Stray Sod Country. I had worked with McCabe on a production of The Dead School and this novel came out around the same time. When I read it I thought that it was something that would really suit the stage so me and him started to talk about it. It’s been written in the last 18 months for the stage.”

He feels that McCabe might be starting to mellow a little bit, with age. “I think so, yeah. I’ve joked with him about that. He doesn’t like dwelling on it, but he ahs been sick himself so I’m wondering if there’s a sense of mortality and that creeping in, certainly into this work.”

The novelist is great company and has a big sense of humour, he added; “he’s hilariously funny and he doesn’t take himself seriously at all. He’s actually great craic and good company to be with. People think that because of the books being dark that he is, but I think people misjudge him. Some of this is very tongue in cheek; there’s some of this that’s absolutely hilarious. To be in a rehearsal room is wonderful fun, that’s what I find most about him and why I’ve worked with him so much, there’s a great sense of joy in the work.”

Those who have read the novel will see that it has been pared back quite a lot for the stage. “It’s a big play, but we couldn’t put it all in. When I read the first script that Pat sent to me there were numerous characters and I said jokingly that it would have to be the National Theatre in London to put this on. What really stuck out for me was that it was a woman’s play, whereas I worked with him on The Dead School before, which is probably a man’s play, for want of a better word. The two protagonists are men, but when I read the script of this it was the women’s stories that were coming out.”

The play captures patterns of communication and interaction that have now ceased to exist he feels. “It’s the big vernacular world of that border area, with women talking in the 50s, not unlike Northern England of that time with women on doorsteps and out hanging clothes and that whole sense of people communicating in small towns.”

It also captures some of the mood of the time, which was forged by some major global events. “There was a whole background to that 50s world that was quite scary for people, the whole Cold War thing, there weren’t news bulletins like there are now so they were getting glimpses of this Cold War and there was a fear the world was going to end. The Manchester United air disaster happened, planes falling out of the sky and there was this big world feeding into the small town paranoia of what people didn’t really know about.”

*The Bridge Below The Town will be at  Glór on Friday and Saturday nights next.