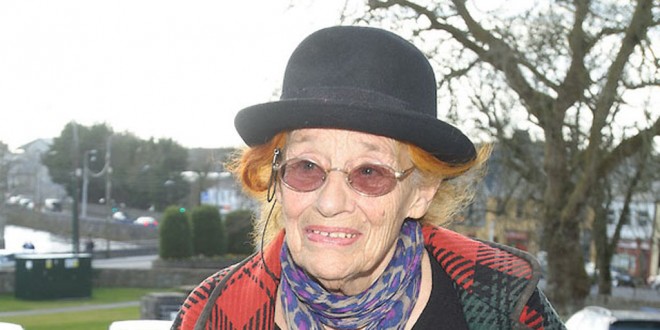 People always ask Margaretta D’Arcy how did she become an anti-war activist?

In her new book, Ireland’s Guantanamo Granny, the Galway-based activist answers the question by showing how her early experiences of war motivated her to campaign for peace.

“I’m nearly 82 and not many people will remember the effect of World War II. My family had been living in Dublin but when I was about four or five, my father was transferred. He was a civil servant with the Department of Agriculture and we were to go and live in England,” she says.

“A couple of days later came the news about the beginning of the war. The whole of London was like a war zone, with all these barrage balloons and sirens going off. It was an extremely frightening experience.”

Ms D’Arcy says what followed was “panic” to get the family back to Ireland.
“I think when a child has that trauma and the effect of the war on civilians, with everyone in a panic, people were getting lost. It never left my imagination,” she says.
“Later, when I was in London working in the Royal Court Theatre, all the actors and playwrights were actively against the nuclear bomb.”

Ms D’Arcy said she became a member of a committee of about 100 with a remit to commit civil disobedience.

“The book explains where I’m coming from; it’s just not one day I suddenly woke up and thought, ‘Oh my God, I have to go on the runway at Shannon’.”

Ms D’Arcy appeared in court in relation to an illegal incursion of the runway at Shannon Airport during a protest over its use by US military on October 7, 2012. She was sentenced to a three-month suspended sentence at Ennis District Court in January 2014.
The activist, who had been undergoing treatment for cancer at the time, refused to sign a bail bond to stay away from unauthorised zones at Shannon Airport and her suspended sentence was activated.

Ms D’Arcy served nine and a half weeks of the sentence at Limerick Prison. She also spent a number of weeks at Dóchas women’s prison in Dublin.

She said the last time she was at Shannon Airport was about a month ago for a vigil. She says there is an anti-war element to their campaign regarding the upcoming general election.

“It’s about trying to get TDs to commit themselves to a peace pledge, which is that they would have planes searched, that we wouldn’t have anything to do with illegal wars. That campaign is ongoing and we’ll be getting all of the TDs who will be standing for the election to sign this.

“I think the Government is in a complete state of denial about it. They’re confused because I don’t think if you read any of their statements that it makes any sense at all.
“They keep saying, ‘We’re neutral and we’re all for the Constitution’ but the Government are in total denial about the health service and water charges too.”

Regarding individuals she would like to see claim a seat in the general election, Ms D’Arcy said Independent Catherine Connolly in Galway West and Catherine Murphy of the Social Democrats are candidates she admires greatly.

“Catherine Connolly lost by five votes the last time around and she is a very outspoken woman, not that I think there’s going to be a great change in what’s happening but I think that a portion of the Independents and people like Catherine Murphy, are at least bringing out information. They give some kind of clarity about what’s going on.”

Ms D’Arcy said the brief prison sentences served by TDs Mick Wallace and Clare Daly last month are examples of the unsatisfactory way in which the country is run.

Last month it was revealed the cost of their imprisonment, which covered fuel, staff and administration, was €8,000.

“I think they feel the same as me, that the Government don’t know what the hell they are on about because they certainly weren’t going to put them into jail after what happened to me. That was absurd, they drove them all the way down from Dublin to Limerick.”

Ms D’Arcy said she is “hopeful” the situation might change after the election.

“At our meeting down in Shannon, we have spoken about trying to commit these politicians to sign a peace pledge, which is that we should not engage in war and that we should have the immediate end to the US military’s use of Shannon.”

Returning to her book, Ms D’Arcy said she recently found some letters from her father who also spent time in Mountjoy in the 1920s.

She says she has been able to compare his experience to her experience some 90 years later.

“My father was part of the War of Independence struggle and he was active in the Dublin Brigade. These letters are very funny because he’s writing letters to his mother and it’s mentioned that when he was arrested he was on his bicycle. His bicycle was left there on Dawson Street and he wants one of his brothers to go and pick it up,” she says.

“So I have a mixed bag of things and the story is about the other women I was in jail with and about the death of my partner, John and the horrendous experience that was.”