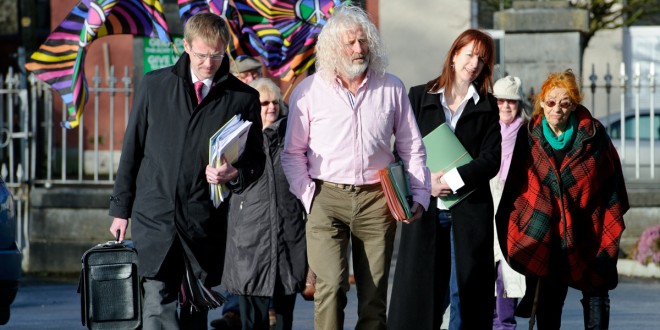 WEAPONS have been routinely carried through Shannon by the US military, it was claimed at Ennis District Court on Tuesday, during a hearing into a case against TDs Mick Wallace and Clare Daly.

During evidence, Irish Times security analyst, Tom Clonan played a recording taken from a plane at Shannon, which advised soldiers to leave their weapons on board. Also, a former Irish army officer warned that missiles that were brought through the airport on one occasion could have resulted in it being blown up, along with much of the adjacent Shannon Industrial Estate.

Mr Wallace, 59, of Clontarf Road, Dublin 3, and Ms Daly, 46, of Elmwood Drive, Swords, Dublin, are accused of climbing a perimeter fence at Shannon Airport and entering a part of the airport to which they were not permitted on July 22 of last year, contrary to the Airport Bylaws of 1994.

While the case is being contested, neither have denied that they entered restricted parts of the airport by climbing a fence.

Indeed, at one point, Mr Wallace jokingly asked for the return of a rope ladder that was produced in evidence. Neither did they deny that they were shown on CCTV footage being taken from a restricted area on the day in question.

Instead, their defence has focussed on their claims that the use of Shannon by the US military is a violation of Irish neutrality.

Witnesses called by the defence have also criticised a lack of effective inspections on US planes, with a claim that relying on diplomatic assurances from America is “as useful as a chocolate teapot”.

Ms Daly is being represented by Gareth Noble, while Mr Wallace is formally representing himself.
At Tuesday’s sitting, Garda Sergeant Noel O’Rourke showed the court CCTV footage from the day, showing the two defendants outside the perimeter fence and subsequently on a grass verge, at airside, in an area that is not accessible to the public without permission.

He also said that while the footage showed them on a grassy area, they had crossed an area used for the taxiing of aircraft.

Declan Vaughan of the Airport Police and Fire Service said that on the day in question he had approached the two defendants while they were airside. “I asked what their business was in the airport and they said they wanted to inspect the aircraft on Taxiway 11 with the Irish army.”

His colleague, Inspector James Watson, also gave evidence of speaking to the two defendants, who he acknowledged had been “very civil” in their dealings with him.

Under questioning from Mr Noble, he agreed that all military aircraft are guarded at all times by members of the Irish Defence Forces and the gardaí. He also acknowledged that airport police don’t have the authority to carry out searches.

Another colleague, Pat O’Brien also gave evidence, saying that on the date in question a rope ladder, had been found inside the fence.

The rope ladder was shown in court and when Judge Durcan asked Mr Wallace if he had any questions, the flamboyant TD said his only question was if he could get the rope ladder back, which sparked laughter throughout the courtroom.

Resuming his evidence, Sergeant O’Rourke said that on the day, Mr Wallace had explained the actions of the pair by saying they had “entered the airport to make a political statement regarding the use of Shannon Airport for military purposes and to bring it to the attention of the minister because the minister is not listening”.

He said that he had asked Ms Daly about cuts to her lip and two of her fingers and she had told him they had occurred as she was getting over the fence. The witness said she declined medical attention.
Sergeant O’Rourke was questioned by Mr Noble and Mr Wallace about how gardaí police Shannon Airport. When asked about what he would do if he was given good grounds to believe that arms are on board a plane, he said that without disclosing privileged security information, something Judge Durcan urged him not to do, the matter would have to be referred to the Department of Foreign Affairs.

Mr Wallace asked the witness if he would apply the law differently on the runway compared to on the street. He replied, “the law is different”.

Mr Wallace claimed that he had been “treated with total respect and in a very professional manner” by all security personnel he encountered on the day, while Mr Noble claimed that gardaí weren’t being allowed to use their discretion if there are reports made of aircraft carrying arms.

Garda Emer O’Riordan also gave evidence and acknowledged that she had heard the Dáil deputies say they wanted aircraft at Shannon searched. She said she had not passed on such information and that, to her knowledge, no-one had taken a statement from the defendants.

Introducing the defence case, Mr Noble said there is a legitimate concern about the national policy of neutrality, that there is a gap of oversight in relation to the monitoring of US planes and that the defendants have made attempts in the national parliament to have questions answered and to have the Shannon situation dealt with.

Judge Durcan provoked more laughter when he suggested Mr Noble was “putting the court in the position of the Skibbereen Eagle 100 years ago” (the Cork newspaper famously warned that it was keeping an eye on the Czar of Russia).

However, he did go on to allow witnesses ample time to discuss matters relating to Irish neutrality and the American use of Shannon.

The first defence witness called was Irish Times security analyst, Dr Tom Clonan, who is also a former Irish Army officer. Prior to giving evidence, he had been seated in the public gallery beside garda whistleblower, John Wilson.

He spoke about interviewing soldiers passing through Shannon on their way to a war zone some years ago. He said that after getting on board an aircraft, he saw soldiers putting automatic pistols into bins and putting automatic weapons at their feet.

Mr Clonan also played a recording taken from the flight, in which soldiers were told they were arriving at Shannon and that all weapons had to be left on board.

He also claimed he had been “quite surprised” at some of the arrangements regarding the carriage of weapons, saying that as a former military man, he would have been reluctant to allow them be carried in a pressurised cabin.

Mr Clonan said that at times the US military has referred to Ireland “as members of the coalition of the willing” due to the use of Shannon, while he said an MP in the Lebanon had expressed dismay to him about the current Irish policy.

“One of my principal concerns about Shannon Airport is that our neutrality has become diluted to such an extent that it’s being questioned abroad,” he added.

He said that he didn’t think that anyone can realistically call Ireland a neutral State and that if any opposing group were using Shannon like the US is, America would identify it as a target.

Costa Rican national, Roberto Zamoro also gave evidence for the defence and described himself as the only person in history to get their country out of a war through a constitutional challenge, which he took against the country’s participation in the Iraqi war pursued by the US and UK in the early 2000s.

Mr Wallace asked him if there would be a violation of neutrality if a country allowed 2.5 million troops to be brought through an airport on their way to a war zone over 12 years.

Mr Zamoro replied, “If that is the case, yes, there is a violation of international law and Irish neutrality”.

He said that if Ireland was neutral, it would have to allow other combatants, perhaps Iraqi or Afghan, to use the airport and that there could be “a very ridiculous situation where you have two belligerents passing through the airport at the same time and you are requesting them not to bomb each other”.
The next defence witness was Patrick O’Toole, a former driver on in-flight kitchen trucks at Shannon, who worked there for around one year from June 2003.

Under questioning he said he had often been on planes used by the US military. Asked if he had ever seen guns on them, he replied “all the time”. Elaborating, he said that when walking through the planes, rifles could be seen under every seat and there were crates with revolvers on the flights also.
Former UN official, Denis Halliday gave evidence and criticised American use of depleted uranium in Iraq, while he also claimed that prisoners who had been held in Guantanamo Bay believed they had been brought through Shannon, although they couldn’t be sure.

The final defence witness of the day was Professor Edward Horgan from the peace group Shannonwatch, who is also a former Irish army officer.

He said that a number of years ago, an aircraft with Patriot missiles had landed at Shannon, causing great danger to all in the area. “If the plane had gone on fire at Shannon Airport, there would be no Shannon Airport now and a lot of the industrial estate would be gone.”

Prof Horgan said it is “inconceivable” that US military planes would land at Shannon without weapons on board, while he concurred with a suggestion from Mr Noble that US diplomatic assurances are “as useful as a chocolate teapot”.

He said that Shannonwatch has provided Shannon gardaí with a huge amount of information but he claimed no proper investigation has taken place.

Also, he said that Shannon is not designed for military use, as military airports are built to cope with the possibility of military aircraft crashing.

After a hearing lasting several hours, Judge Durcan adjourned the matter until March 10, when two more defence witnesses are due to give evidence, while the two defendants are also due to speak.