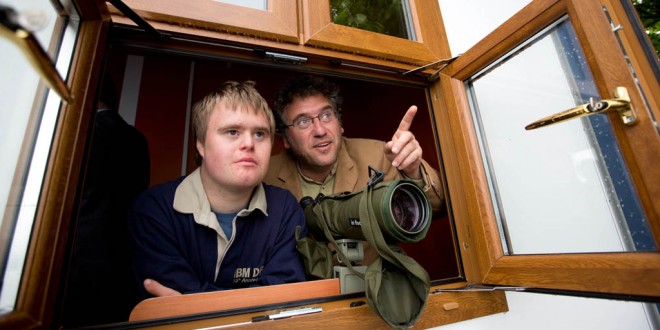 Fionn Crombie Angus and his dad, Jonathon from Mountshannon taking in the views from the White Tailed Sea Eagles viewing and information point.

MORE  than 2500 visitors have so far flocked to see the White Tailed Sea Eagles viewing and information point  in Mountshannon since it was officially opened on July 4 last.

Located at Mountshannon Pier and funded by Clare County Council, the new tourism development features telescopes and information and displays about Ireland’s largest and most spectacular breeding birds, including the first of the species to be born in the country in 110 years on Bushy Island in Lough Derg.

The facility is being operated by the Mountshannon Eagle Group, Mountshannon Community Council and the Golden Eagle Trust, and will remain open until the end of September.

Congella McGuire, Clare Heritage Officer said the introduction of the viewing point has further increased public interest in the local White Tailed Sea Eagle population without disturbing them in their natural habitat.

“Since the birds first arrived in Mountshannon three years ago, the council has worked closely with the Golden Eagle Trust and the local community to ensure they are afforded every opportunity to thrive. The delivery of this viewing and information point further safeguards these impressive birds and their nesting activities, as well as promotes their ecology and conservation. It’s also an excellent addition to the local tourism infrastructure,” she said.

“It is very encouraging to see that the general public has shown significant interest in this structure, which is purpose built and designed specifically for the purposes as a bird viewing and information point.

“The goodwill and support shown by the local community and Clare County Council has been central to the success of this project to date and we look forward to promoting Mountshannon as an example elsewhere of how best to increase public access to and awareness of such birds without disturbing them, especially during nesting periods,” commented Dr. Mee.

Denis Minogue of the Mountshannon Eagles Group revealed that an average of 130 people visited the viewing point every day during the opening week, rising to around 150 to 200 people each day since.

“Being able to view a breeding pair of White Tailed Sea Eagles in their natural habitat is not only a unique experience but something the people of Mountshannon and those who live around Lough Derg are very proud of. We look forward to working with the local community and other groups to ensure that the birds are protected into the future,” he said.

The Mountshannon breeding pair, a six-year-old male and five-year-old female, were originally collected as chicks on the island of Frøya off the west coast of Norway by the Golden Eagle Trust. The birds were released in Killarney National Park before relocating to Lough Derg in 2011.

The pair, named Saoirse and Caimin, created history in 2013 when they reared the first chicks to fly from a nest in Ireland in 110 years. The pair successfully hatched another chick in late April of this year.