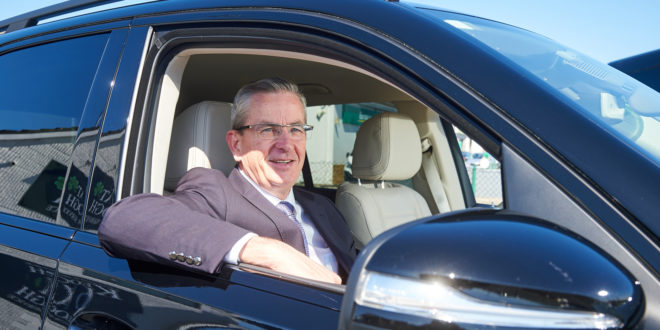 AUTHOR, campaigner and advocate Vicky Phelan has paid tribute to a Clare man for his generosity in helping her to access her ongoing cancer treatment during the Covid-19 crisis.

Pat Keogh has operated an executive chauffeur service for the last three decades and described his journey to Dublin with Vicky as one of the most rewarding experience of his career.

The Newmarket-on-Fergus resident heard a radio interview in which Vicky discussed her difficulties in getting to the capital for cancer treatment and her concerns over contracting Coronavirus. The Limerick woman has been self-isolating since early March and is continuing to travel for treatment for terminal cancer. She told RTÉ’s Bryan Dobson about her how daunting that prospect was in the context of the pandemic.

“I would normally have a very early start in the mornings, but since the travel restrictions I have more time for a lie-in,” Pat said. “I got to hear Morning Ireland and I was really moved by Vicky’s situation.”

“We have the fleet and driving is something we would be doing every day anyway, so I was just honoured to be able to take Vicky to Dublin,” Pat said. “She is an inspirational person who has set aside her own situation to do so much for the country. I wanted to do all I could to make sure she was safe and comfortable. She was great company and we chatted throughout the journey.”

The repose to Pat’s kind gesture went viral after Vicky tweeted her thanks. “Vicky asked me if she could tweet and I didn’t think too much about it,” Pat explained. “I’m into social media, but mostly just for work. My son is the company’s Operations Manager and he predicted a big reaction to the tweet. He said that my phone would be hopping and he was right. The response has been just phenomenal.”

“Thank you does not cover your amazingly kind gesture,” Vicky tweeted, prompting a massive number of positive comments.

“Vicky was overwhelmed with our offer of help,” Pat noted, “I have to say that in my 30 years in the company, travelling with her was one of the most fulfilling things I’ve done and it was an absolute honour.”

Fiona McGarry joined The Clare Champion as a reporter after a four-year stint as producer of Morning Focus on Clare FM. Prior to that she worked for various radio, print and online titles, including Newstalk, Maximum Media and The Tuam Herald. Fiona’s media career began in her native Mayo when she joined Midwest Radio. She is the maker of a number of radio documentaries, funded by the Broadcasting Authority of Ireland (BAI). She has also availed of the Simon Cumbers Media Fund to report on development issues supported by Irish Aid in Haiti. She won a Justice Media Award for a short radio series on the work of Bedford Row Project, which supports prisoners and families in the Mid-West. Fiona also teaches on the Journalism programmes at NUI Galway. If you have a story and would like to get in touch with Fiona you can email her at fmcgarry@clarechampion.ie or telephone 065 6864146.
Previous Silent commemoration for Canada Cross attack victims
Next 41 More Deaths In Ireland From Covid-19