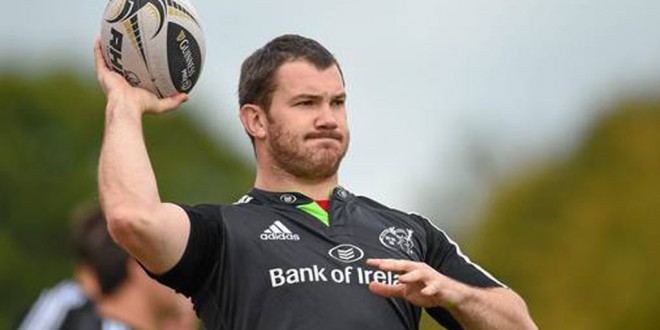 An injury to his left foot during a training session in July 2013 has finally caught up with Munster’s Damien Varley.

The 31-year-old hooker has three caps for Ireland and made 121 appearances for the province, scoring 12 tries. Damien, who lives near Killaloe, has only made one substitute appearance for the province this season in the victory over Leinster in October.

He underwent surgery three months ago on the injury but has decided to retire after exhausting all possible avenues to a return.

He played club rugby with Garryowen before joining the Munster set-up. He joined London Wasps in 2008 but returned to Munster the following year and shared in some of the provinces greatest moments.

He started in Munster’s historic win over Australia in Thomond Park in November 2010 and was the starting hooker in the province’s Magners League winning Grand Final against Leinster in May 2011.

Varley first represented Ireland against Australia in June 2010, and his two other appearances were both against Argentina, with the most recent taking place in June 2014. He has 4 Ireland ‘A’ caps.

Commenting on his retirement, Damien said, “It is with great sadness that I have to announce my premature retirement. Like so many before me I will look back at my time in Munster with immense pride and fondness, not only for the sport, but for the people that I have played with, worked with and the friendships I have made.

Outside of rugby, Damien completed a degree in biomedical engineering from the University of Limerick in 2007 and recently commenced studying for an MBA.

Munster Head Coach Anthony Foley said, “Damien’s contribution to the squad was so much more than his rugby skill-set. He was a highly regarded and talented individual, and always led by example with his attitude, professionalism and work ethic on and off the field.”