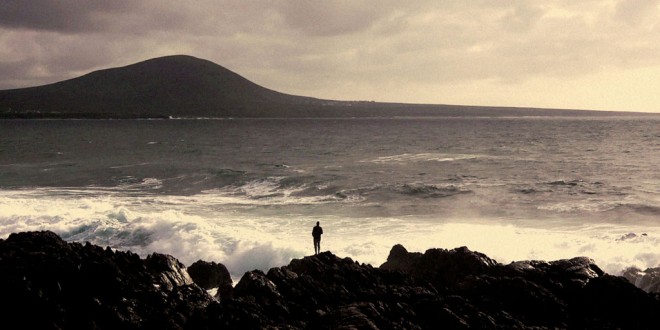 SOLITUDE is an increasingly rare experience and one that many people don’t want.

However, there are some who want nothing more from life than to withdraw from the familiar and late English man, Neal MacGregor, was one of those.

He died alone, prematurely, at the age of 44, in a stone hen house that he couldn’t stand up in, where he lived without water, electricity or heating, on a tiny island off the Donegal coast.

Neal left behind volumes of illustrated notebooks and diaries and his story is told in Neasa Ní Chianain’s film, The Stranger.

Speaking about the film, Neasa said, “I don’t think it’s a depressing film, it’s a poignant film. It’s a story of somebody trying to find their place in the world and I think he does that in the end. It’s kind of a love story as well, about his relationship with an island woman.”

Neasa lived in Donegal herself and was intrigued by the stories about this mysterious, lonely figure.

“I had always heard about the Hermit, as he would have been known. Then a friend of mine went out and did some research and she said no-one really knew anything about him, no-one knew where he came from. There were all kinds of wild rumours about him but nobody really knew. That kind of piqued our interest and we just decided to see what we could find out. It started from there, the journey of trying to find things out about him.
“It was just the idea of what would drive someone to live in isolation like that, what happened to somebody like that.”

Neal died in 1990 and it was years later that Neasa began to look for information on him. She soon discovered that the Hermit had a very rich life before he ever came to one of the most isolated parts of Ireland.

“When I started the film, I knew very little about him and I found out that he had a whole life in London that nobody on the island knew anything about. He was a very, very talented artist and a silversmith. He was quite successful at what he was doing over there. He won some very prestigious awards; he was a very dynamic, likeable character. The people who went to college with him, they all talked of him as being very charismatic. He was head of the students’ union; he organised these great thematic dances. He was just a really cool dude and then something happened to him.”

At this point, he began to disappear from the life of his old friends and after a certain point, they never heard from him again.

“He gradually withdrew from people over in London and a lot of people lost touch with him. They didn’t know what happened to him. The film is about exploring what happened, what went wrong and why did he end up living on the island. While I was making the film, I was actually the first person to tell most of his friends that he had passed away. When he disappeared to Ireland, he really disappeared from everyone’s life, right down to his ex-wife. She didn’t even know he had died.

“All of his friends had been looking for him on the internet because they knew he was extremely talented and they all expected to find him and his work somewhere on the net. But, of course, he had died in 1990 at the age of 44 and it was just before the days of the internet.”

Neasa said that even while living on his own, with no facilities or resources, he still showed the most extraordinary practical skills.

“He was an extraordinary man. While he was out there, he still continued to work and produce. He made this amazing grandfather clock, planed the wood down, cut it into sheets and made this beautiful clock, all with no electricity. He built a windmill while he was out there. He used to fish and instead of buying a fishing net, he knitted his own. He made his own hooks, carved them out of bone rather than just buying the metal ones.”
She managed to track down the diaries he had kept, which had gone to a brother of his, and they gave her an insight into the life Neal lived and what he made of it, while she also got the views of those who had encountered him, both in Ireland and in his earlier life.

“It’s a composite of his own words, what he was thinking and what he was at on the island, the islanders who met him and knew him while he was out there and his family and friends.”

While in many ways it was a lonely life, it wasn’t a completely solitary one.

“He was very close to one lady on the island and they were the last two to live there all year round. Most of the people would leave the island for the winter months but they continued to live there through the winter. They had an elaborate vegetable garden going. They were always making stuff and storing up stuff for the winter.”
That woman had died by the time Neasa got around to making the film but her story is told through a close friend of hers.

While Neal wasn’t particularly aloof when he arrived on the island, he became increasingly so and was a major curiosity for the locals.

Rash talk about people living unconventional lifestyles was hardly unusual in the Ireland of that time and Neasa said a huge amount of stories swirled around the Hermit, even years after his passing.

“There were all kinds of rumours. You have to understand, it was Donegal in the 1980s. People thought he was a spy. The island would have been quite sympathetic to the cause and people were very suspicious about what he was doing out there. They could see him roaming around the place with binoculars. He was always taking notes. Some people still call him the Spy up there. There was one man who said he was a commando, who said he had watched how he moved, had seen him with his hands on his head, walking through the water. There were crazy rumours about black magic and God knows what.”

A major theme of the film is how there can be various perspectives on the same thing or person.

“It’s really about the idea of the many truths of a situation or life. Every story has a different angle, so it’s kind of exploring those various angles and perspectives.”

The Stranger will be shown at Glór on March 26 at 8pm.