Home » Lifestyle » Twelve is a good number for dogs 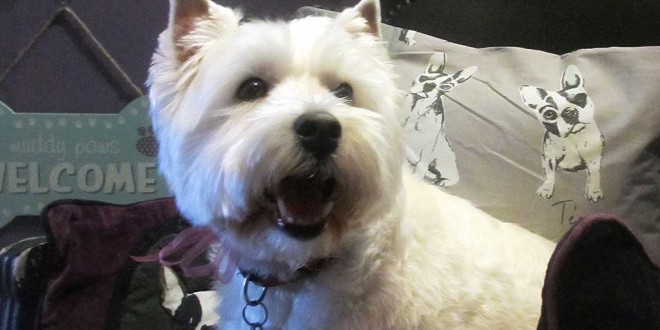 At the Dog Concierge, posing for my closeup.

Twelve is a good number for dogs

It’s been a while since I took over Bev’s column to tell you of my latest travels. I’m only thrilled this time as I’m going back to one of my favourite hotels, The Twelve, in Barna.

Last Christmas, my humans took a photo of me wearing my Santa hat while posing on a copy of The Clare Champion and entered it in The Twelve’s Christmas competition. Despite the stiff opposition, I won! The prize was a night at the hotel with dinner in The West restaurant. It’s a terrible state of affairs though that I’m not allowed in the restaurant, even though I’m a Westie. Maybe I’ll get a little doggie bag.

They really welcome dogs at The Twelve but I’ve heard they’ve upped their game with a new Dog Concierge service. It sounds wonderful and I had to try it out.

As an added bonus, would you believe that RTÉ are sending a film crew along to record my little break? They’re doing a documentary on regional newspapers and as the only true news hound in the country, they want to follow me for the day. How exciting!

We arrived at The Twelve to check in and there to meet us was Fiona, the reservations manager, Sam the receptionist and Fergus, the general manager no less. Everyone made a big fuss of me as we checked in and I even got my pawprint taken. I’ve never had that done before and the white stuff they used felt squidgy on my paw – like walking through lovely mud. I’d better be careful from now on as my prints are on file.

Next, it was on to the Dog Concierge area that I had heard so much about. They’ve set up a special area beside reception with lots of dog treats and bowls of water in case any canine guests get a bit peckish. There’s towels in case we get dirty on our walkies and anything else you could think of.

I was most impressed.

Best of all, there’s a throne in the corner that I was able to sit on and have my picture taken. I hope they got my best side. I was one of the first dogs to go through the concierge area as it has just opened up but every doggy guest will be photographed here when they arrive. Quite right too.
We were escorted up to our room then and what a room. There was plenty of space to roam about and lots of lovely things to sniff. A blanket was already set up for me to sleep on and a lovely dog bowl too. I could get used to this.

That wasn’t the end of the surprises though and within minutes, Fergus arrived at the door with a whole tray of treats for me. Dog snacks, squeaky toys, even a rubber chicken. Everything I could possibly need. For my humans, there was a can of Guinness and a framed picture of my competition-winning photo. Now that was a nice touch. There was even a copy of The Clare Champion and everything was decorated in Clare colours. They really thought of everything.

We didn’t spend long in the room as I had another appointment at the dog spa across the road. Bubbles and Barks has moved into impressive new premises on the crossroads. It’s a very dog-friendly place.

I was expecting a nice wash and blow dry but it didn’t stop there. I had a skin-specific mud-bath and a blueberry facial, no less.
The last time I had a mud-bath, I had to roll in a field and my humans weren’t best pleased. This time around, they seemed delighted, as was I with the finished result. My skin felt silky and soft and I had a lovely blueberry aroma coming from my smig.

I felt a million dollars as I strutted back across the road but not before I gave Katie and the other girls at the spa a special lick to thank them for everything they’d done.

The next time I go back to Bubbles and Barks, Katie will have her own dog, Gráinne the Poodle, and I can’t wait to meet her.

We went back to the hotel to meet up again with my film crew and they wanted some action shots. Life as a film star is all go. We headed for the Silver Strand, just down the road and I got special dispensation to run on the beach as I promised faithfully to behave myself. I ran around the beach like a mad thing for the cameras and everyone we met admired me. That spa treatment really worked wonders for my complexion.

We got back to the room and my humans started getting ready for their dinner but there came a knock on the door. It was the turn down service. Not for my humans, but for me! I got another blanket and towel and a special doggy treat from Catriona to keep me happy while I was on my own in the room.

I can’t say much about the dinner at The West, as I wasn’t allowed down. I did get a few scraps later as a special treat and they were delicious. I’m sure the rest of the meal was as good.

To round the night off, myself, my humans and their cousins, Berna and Pat, had a nice drink and chat in the bar.

I’d love to have stayed longer but we had to get back to Ennis. The following morning, I met another doggie guest, a friendly Basset Hound. Even though he looked sad, I think that’s the same for all Bassets. He told me that he had an equally good time during his stay.

I left The Twelve in Barna, already looking forward to my next visit, which I’m sure will be soon. It’s one of the nicest hotels for dogs that I’ve ever come across and I give it a full five paws, with a special extra woof for their unique Dog Concierge. 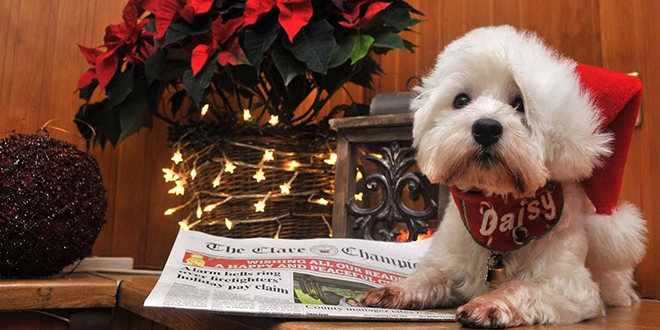