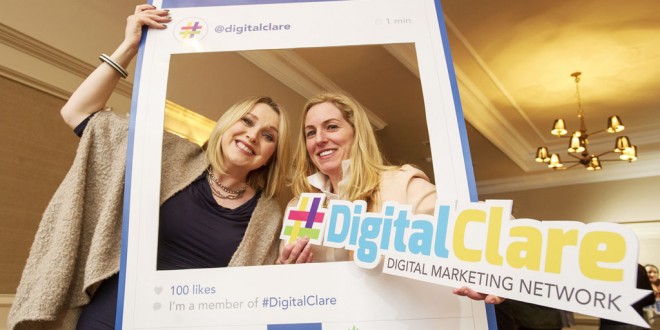 Tess Purcell and Emily Murphy at the official launch of #DigitalClare in the Temple Gate Hotel, Ennis. Photograph by John Kelly.

#Digital Clare, a newly-founded digital marketing network for County Clare, reached 3.5 million people after it was launched at an event in the Temple Gate Hotel in Ennis this week.

The initiative, which has been run under the CLDC programme, Ditigal Animation, funded by LEADER, has been facilitated by Digital Training Institute founder and Apprentice finalist, Joanne Sweeney Burke.

Speaking to The Clare Champion, Joanne explained how the network came about.
During the first phase of the programme, Joanne conducted digital marketing and social media courses, delivered from June to October, where she trained 125 people in Clare and delivered 90 one-to-one mentoring hours.

“We had such a huge response that we felt we were onto something and that there was an appetite there. We then developed phase two, to create something more formal, like a network, so the idea of DigitalClare was born. Everything that CLDC do under Leader is all about scalability. While I’m contracted as a facilitator to provide the training, I’m actually training them to run the network themselves.

“That’s the ultimate aim. My contract ends at the end of March and it is hoped then that people will come together as a voluntary group and run it,” she said.
On Wednesday, CLDC put the call out to the public to get involved and 180 people turned out for the launch event.

“We had to get extra seats and there was standing room only. I think that reflected the appetite we spotted last summer. On the first night out, our Twitter account was live for 36 hours and the hashtag trended in Ireland for a full 24 hours after the event. We reached 3.5 million people in that timeframe, so it was pretty exciting. And you’re talking about a county in the West of Ireland, not an urban city,” Ms Sweeney Burke explained.

She added that she was “genuinely surprised and invigorated by the level of entrepreneurship in County Clare” but also “the can-do attitude”, since embarking on the programme.

“I’ve now engaged with 300 people, face to face, and they are so positive. I think there is a huge sense of collaboration, so when they come into a group setting in the training courses, there’s no sense of competition, which is really positive,” she said.

Going forward, DigitalClare has a structured approach for the next 10 weeks. Three more social media strategy courses will be held, two of which are fully booked, and three online courses, whereby people can log in wherever they are.

“We have four networking events planned, one being on Wednesday, February 18, location to be confirmed, from 7pm to 8.30pm. Then we have the weekly tweet-up. We had the first one on Tuesday night, from 8pm to 10pm. Essentially, people follow the hashtag #DigitalClare and introduce themselves. We follow each other and promote each other and have a conversation.

“That’s going to happen every single Tuesday night at 10pm from here on in. There will be a monthly face-to-face networking event so, while we all have digital and remote, nothing beats meeting and talking to someone and having that support,” she said.

CLDC are investigating the possibility of having ongoing training provided, for free, in social media and digital marketing. The network and programme is open to a variety of interest groups and Joanne said they don’t have to be in business.

“You might be unemployed or looking to up-skill. It’s for community and voluntary groups, businesses, employees that would see digital marketing as an opportunity. We are also inviting people who have an interest in Clare, whether that is State agencies or tourism bodies and businesses outside the county that may be looking to relocate. To date, it has been absolutely free and has been funded by the Leader programme and it’s administered by CLDC,” she concluded.

Previous Clare teachers get a blue star
Next No Shannon guarantee no deal, Minister hints