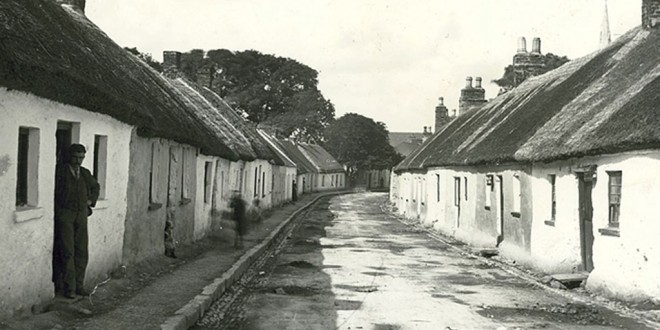 A view of the Turnpike from the Lawerence Collection

A FINAL appeal for memories of the Turnpike has been made by Flan Hehir from McNamara Park, who has been working in recent months on compiling a new book exploring the history of the area.

Flan’s new publication will explore the history of the old and new Turnpike area. The book is being produced in conjunction with Clare Roots Society. Last year, the partnership, in conjunction with the residents of McNamara Park, produced a booklet to mark the 50th anniversary of the first replacement houses to the Old Turnpike.

Flan has been carrying out research over the last 18 months, travelling the town and country, collecting memories and photographs of the houses and tales of former residents.
While his extensive research has uncovered many interesting stories, he is urging anyone with any information they feel could be useful in the book to contact him.

“The current appeal is for contributions of photographs, documents, invoices and memorabilia of all kinds associated with the area.

The new book, while covering the old Turnpike back to 1752, will also include items associated with McNamara Park, Dalcassian Avenue, Drive and Park and the Turnpike Road,” he explained.

Flan can be contacted at 087 6534966 or flan.hehir@gmail.com or through Clare Roots Society at secretary@clareroots.org.

The Turnpike Road derives its name from a turnpike at which travellers had to pay for the use of the road for passage. Turnpikes or toll roads have existed for centuries, with fees collected from passing travellers on foot, wagon, horseback and later automobiles.
The Upper Turnpike Road incorporates the remaining wall of the Turnpike Toll House.

In 1943, it was first proposed in a report that the Turnpike would make an ideal building site and it was proposed that the first steps should be taken to rebuild the whole street at the first available opportunity.

In September 1962, Dermot P Honan, chairman of Ennis Urban Council, cut the sod on the site of the first phase of the new housing scheme at the Turnpike. Eighteen two-storey and 12 single-storey houses were erected on the six-acre site and the scheme was completed in 1964.

The second stage of the Turnpike scheme consisted of 96 two-storey houses and 24 flats for older people, 12 flats for newly-weds and a shop.

The scheme involved the demolition of 100 old single-storey houses, most of which were in an advanced stage of decay.

The road has historical connections with some great leaders of the past, who used it when coming to the town to address public meetings.

In recent times, the area became world famous when in September 2009, Ennis came to a standstill with the arrival of Muhammad Ali.